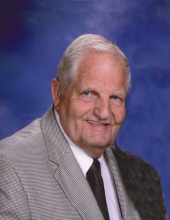 The service will be live-streamed on the First Christian Reformed Website http://www.atfirst.org/

Burial will be in the East Lawn Cemetery in Sheldon, Iowa with full Military Rights presented by:
McGlothlen-Cowie Post #145 of the American Legion.
Visitation with the family present will be from 10:00 until the time of service on Tuesday, November 24, 2020 at the First Christian Reformed Church in Sheldon, Iowa
The family requests that everyone observes the social distancing guidelines
Masks are required during the visitation and the service at the church
with limited seating available for the church service.

CONGREGATIONAL HYMNS
“Great Is Thy Faithfulness”
“Amazing Grace”
“Turn Your Eyes Upon Jesus”
“God Be With You Until We Meet Again”
Organist: Yvonne Bolkema

Military Rights presented by:
McGlothlen-Cowie Post #145 of the American Legion.

Bernard “Bernie” Bousema, the son of Arie and Hattie (Holtrop) Bousema was born on March 15, 1935 at the family farm near Sheldon, Iowa. He received his education from the Sheldon Community School, graduating in 1953. Bernie served in the United States Army during the Korean Conflict working in the mailroom. After his discharge he came back to Sheldon where he was united in marriage to Gwendolyn “Gwen” Ruth Woudstra on June 10, 1959. They made their home in Sheldon where they operated Bernie’s Water Care for 9 years. Bernie sold cars for Koopman Motors, D&H Motors and for Hamill Motors, and retired after 30+ years. Gwen preceded him in death on December 7, 2018. Bernie passed away at the Fieldcrest Assisted living in Sheldon, Iowa on Friday, November 20, 2020 reaching the age of 85 years, 8 months, and 5 days.
Bernie was a member of the First Christian Reformed Church in Sheldon and served as a past Deacon. He was also a member of the Sheldon McGlothlen-Cowie Post #145 of the American Legion.
Our dad "Bernie" was a fun-loving, caring person who truly enjoyed life. He treated people with respect and kindness. He was an excellent car salesman who worked hard for his customers. His dedication to his family was evident by him attending all his children's activities. Above all, he was a Christian role model to his kids, grandkids, and great grandchildren. We Loved him greatly and he will be Dearly Missed!!
Left to cherish his memory are his three children, Harlan (Kim) Bousema of Sheldon, Iowa; Cher (Curt) Pingel of Pella, Iowa; Jill (Brian) Sipma of Lynden, Washington; seven grandchildren and 4 great-grandchildren, a brother, Art (Marlene) Bousema of California; two sisters, Greta Bomgaars of California and Gert Rossi of Utah; and other relatives and friends.
Bernie was preceded in death by his wife, Gwen; his parents, and five brothers, Rich, Roy, Hank, John and Bill.
To order memorial trees or send flowers to the family in memory of Bernard "Bernie" Bousema, please visit our flower store.