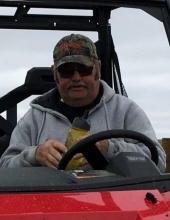 Visitation
with family present will be
from 5 – 7 P.M. on Thursday, December 26, 2019
at the Eldridge Family Funeral Home in Paullina.

CONGREGATIONAL HYMNS
“Just As I Am”
“Amazing Grace”
“What a Friend We Have in Jesus”
“Lift High The Cross”
Organist: Jolene Erickson

In lieu of flowers, memorials may be directed to Orange City Area Health Ambulance Fund or Arthritis Foundation.

After today’s service relatives and friends
are invited to join the family in the Germantown Community Building.

Bernard Ray “Bernie” Bruns, the son of Richard and Bernadine (Heithus) Bruns was born September 21, 1958 in Primghar, Iowa. He received his education at St. John Lutheran School in Germantown, Iowa. On June 9, 1979, he was united in marriage to Mary Roseland at St. John Lutheran Church in Germantown. After their marriage the couple lived in Germantown, Cherokee and Paullina while he was farming with his dad. In 1992, Bernie and Mary purchased their farm and moved south of Paullina. Bernie farmed as well as raised cattle and hogs. He passed away at his home on Sunday, December 22, 2019 reaching the age of 61 years, 3 months and one day.
He was baptized on October 5, 1958 and later confirmed on April 15, 1973 and was a lifelong member of St. John Lutheran Church in Germantown. His biggest enjoyment was spending time with his family especially the grandchildren. He liked to fish when he could, and farming was his life.
Bernie is survived by his wife, Mary of rural Paullina; four children, Charity (Adam) Harper of Paullina; Amber (Jon) Jones of Dickens; Rose Bonnel of Paullina and B.J. (Amber) Bruns of Paullina; nine grandchildren, Brendan, Tyler, Chloe, Aubree, Jacob, Alyssa, Graci, Kailee and Keegan; his father Richard Bruns of Remsen; his mother, Bernadine Timmerman of Paullina; brothers and sisters, Cindy (Kenny) Rabel of Charlotte, North Carolina; Randy (Elizabeth) Bruns of Sheldon, Iowa; Lori (Brian) Brietbarth of Hilo, Hawaii; Richard Bruns Jr. of Paullina; Patricia Morenz of Newell, Iowa; Gerry (Jody) Rickers of Mason City, Iowa; a brother-in-law, Gary Morenz of Newell, Iowa; his mother-in-law, Evelyn Roseland of Paullina; also other relatives and many friends.
He was preceded in death by his maternal and paternal grandparents, father-in-law, George Roseland and brother-in-law, Steve Roseland.
To order memorial trees or send flowers to the family in memory of Bernard "Bernie" R. Bruns, please visit our flower store.