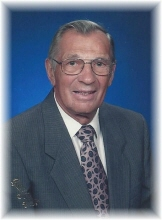 Bernard Lamfers, age 87, of Brandon, South Dakota, formerly of Sheldon, Iowa, passed away on Wednesday, August 14, 2019 at Bethany Home in Brandon, South Dakota. Funeral services will be Saturday, August 17, 2019 at 2:00 P.M. at the First Reformed Church in Sheldon, Iowa. Rev. Paul Van Maaren officiating. Burial will be at 3:30 P.M. at Gilman Township Cemetery in Ashton, Iowa. Visitation will be Friday, August 16, from 4:00 P.M. to 7:30 P.M. with the family present from 6:00 to 7:30 P.M. at the Andringa Funeral Home Sheldon Funeral Service in Sheldon. Bernard (Bernie) John Lamfers was born July 7, 1932 to John and Bertha Lamfers of Ashton, Iowa. He was raised on a farm near Ashton, Iowa and graduated from high school from Ashton, Iowa as well. Bernard was drafted into the Army in 1953 and was stationed in South Korea and Japan. After being discharged from the Army, Bernard enrolled at Nettleton College in Sioux Falls, South Dakota for a business degree. After college, Bernard began work at Armors Egg Products in Sheldon, Iowa and then eventually working at DJ Egg Products in Boyden, Iowa. He was united in marriage to Henrietta Vander Streek in 1962 making June 5, 2019, 57 years of marriage. In 1964 the couple was blessed with a son, Harvey. Bernard was a quiet guy who would sit and listen to conversation. Every once in while you would catch him with a little grin on his face about conversation that was funny. Bernard retired from working in 1988. It was at this time Bernard and Henrietta became snowbirds and began spending winters in Mesa, Arizona. Spending winters in Arizona is what Bernard lived for. When he was dealt with health issues, he always made sure he was healthy enough to travel south. Spending afternoons at the pool with many of his other snowbird friends is what he enjoyed most. Bernard and Henrietta were able to enjoy 24 years of going down south. In June 2015, Bernard and Henrietta moved to Fieldcrest Assisted Living in Sheldon, Iowa and then on to Bethany Home in Brandon, South Dakota in February 2017 after suffering a fall and breaking his hip. Grateful for having shared his life with his wife, Henrietta; one son, Harvey (Bonnie) Lamfers Brandon, SD; two grandsons, Benjamin (Jessica) Lamfers Clear Lake, SD; Blake (special friend Alexis Boddicker) Lamfers Tea, SD; one great granddaughter, Reagan Lamfers; one brother, John Lamfers of Ashton, IA. Bernard was preceded in death by his parents and one sister, Bertha Roelfs. In Loving Memory Of Bernard John Lamfers Born: July 7, 1932 Passed Away: August 14, 2019 Age: 87 years, one month and 7 days FUNERAL SERVICE Saturday, August 17, 2019 at 2:00 P.M. First Reformed Church, Sheldon, Iowa Family Prayer Service at 1:45 P.M. OFFICIATING Rev. Paul Van Maaren MUSIC Organist: Luann Donkersloot Processional: "What a Friend We Have in Jesus" During the service: "Under His Wings" Recessional: "Abide With Me" CASKET BEARERS Terri Lamfers Roy Roelfs Roland Roelfs David Landaal Marla Viland Char Lubben INTERMENT 3:30 P.M. Gilman Township Cemetery, Ashton, Iowa Following the Funeral Service, the family invites all for fellowship and lunch at the church. ARRANGEMENTS BY Andringa Funeral Home Sheldon Funeral Service Larry R. Andringa, Funeral Director

To order memorial trees or send flowers to the family in memory of Bernard Lamfers, please visit our flower store.