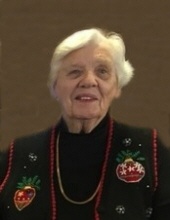 IN LOVING MEMORY OF
BERNICE A. MOUW

Visitation
with family present will be
after 1:00 P.M. until service time
on Friday, January 31, 2020
at the church.

MUSIC
“On Eagle’s Wings” Sung by: Susan Lichty
“Amazing Grace, My Chains are Gone”
Sung by: Alyssa Schnoor
“Just As I Am” ~ Willie Nelson
CONGREGATIONAL HYMNS
“In The Garden”
“The Old Rugged Cross”
Organist: Jett Korver

Arrangements are under the care of the
Vander Ploeg Funeral Home; Sheldon, Iowa.
Bernice Alleen Mouw, the daughter of Leonard and Lillian (Williams) Struyk was born on July 1, 1925 in Sheldon, Iowa. She attended Sheldon Schools, graduating from Sheldon High School in 1943. After graduation she attended Nettleton Business College in Sioux City, Iowa. On December 7, 1946, she was united in marriage to Thomas A. Mouw in Sheldon, Iowa. After their wedding the couple farmed for a year near Boyden before moving to their long-time home and farm north of Sheldon. While farming, Bernice, also worked for Armour Creamery. Tom preceded Bernice in death on May 25, 2006. Bernice continued to live on their farm until 2016 when she moved to Fieldcrest in Sheldon. She became a resident of Sheldon Senior Care in August of 2019 where she passed away on Sunday, January 12, 2020, reaching the age of 94 years, 6 months and 11 days.
Bernice was a life-long member of the First Reformed Church in Sheldon. She and Tom wintered in Mesa, Arizona for 25 years and also enjoyed their motorhome. Her greatest joy was spending time with family and friends at their summer home on Lake Okoboji.
Left to cherish Bernice’s memory are her children and their spouses, Thomas Jr. and Jill Mouw of Sheldon and Mary and Dave Brostrom of Spencer, Iowa; six grandchildren, Mark (Lynne) Mouw, Teresa (Steve) Gardfrey, Brian (Mary) Mouw, Mikayla Mouw, Dylan Mouw and J.D. (Marlene) Brostrom; ten great-grandchildren, Jordan (Jamie), Lila, Alyssa, Kylie, Jayden, Braeden, Landen, Ellie, Everleigh, Josie; two great-great-grandchildren, Jaxton and Jovie; brother, Herb (Lorraine) Struyk and a sister, Elaine Coles both of Sheldon; also other relatives and friends.
Bernice was preceded in death by her husband; an infant great granddaughter and her parents.
To order memorial trees or send flowers to the family in memory of Bernice A. Mouw, please visit our flower store.