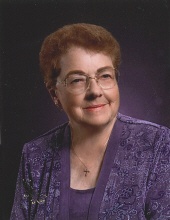 Beverly “Bev” Rhae Lewis
Sanborn, Iowa
Beverly “Bev” Rhae Lewis, age 87, of Ankeny and formerly of Sheldon, Iowa, passed away on Monday, March 30, 2020 at the Prairie View Home in Sanborn, Iowa. Her Memorial Service and Burial will be at a later date.
There will be No Visitation at this time.
Due to state and federal guidance on gatherings due to the COVID-19 pandemic, the family will not be having a public memorial at this time.
The Lewis Family appreciates your Love and Support. Online condolences are sincerely appreciated.
Arrangements are under the care of Vander Ploeg Funeral Home in Sheldon.
Online condolences may be sent to www.vanderploegfunerals.com

Beverly “Bev” Rhae (Bonderman) Lewis was born in Sheldon, Iowa on September 3, 1932, the daughter of Earl and Minnie (Koepnick) Bonderman. She spent her early childhood years in rural Archer, Iowa where she attended and graduated from Archer High School in 1950.
On September 9, 1951, Bev was united in marriage to Lonnie L. Lewis. While serving in the Navy during the Korean War, Lonnie got word via telegram, that on November 2, 1952, he became a father of a daughter, while Bev lived with her parents in Archer. Nearly a year later, Beverly and Lonnie made their home in Storm Lake, Iowa where two daughters and a son were born. Later they moved to Sheldon and then to Melvin during which time the youngest daughter was born.
Beverly and Lonnie then moved back to Sheldon for several years before making their final home in Ankeny, Iowa in 1980.
Bev worked for nearly 39 years for the Bell Telephone Company (later known as AT&T) as a switchboard operator, taking her last call in March of 1994 at the Ankeny Telephone Company.
After retiring from the telephone company, she became a caregiver to her husband until his death in June 2007. She loved her dachshund (Fritz) until his passing.
Since Bev suffered from renal cancer, diagnosed in late 2019, she moved to Prairie View Campus in Sanborn, Iowa where she passed away on March 30, 2020 reaching the age of 87 years, 6 months and 27 days.
Bev enjoyed coffee time at Panera with her friends and luncheons with her fellow retired telephone operators, she also enjoyed music and reading. She particularly loved spending time with her family, who were very important to her. She was a member of the Ankeny 1st Methodist Church.
Beverly’s memory will be cherished by her children: Kathy (Bob) Verdoorn of Hospers, Iowa; Toni (Kel) Jongerius of Sheldon, Iowa and Steve Lewis of Sheldon, Iowa; six grandchildren: Justin (Robin) Jongerius, Nicholas Bode, Christopher (Anne) Verdoorn, Andrea (Dr. L. William) Scheibel, Tawni Lindbeck and Aubrey Lindbeck; four great-grandchildren and one great-great-grandchild.
She is preceded in death by her husband, Lonnie, two daughters, Pamela Bode and Linda Lindbeck, and a sister, Shirley Moore.
To order memorial trees or send flowers to the family in memory of Beverly "Bev" Rhae Lewis, please visit our flower store.