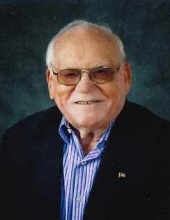 Services for Burdette “Burt” Ebel, age 94, of Primghar who passed away on Wednesday, April 27, 2022, at MercyOne Medical Center in Primghar. His funeral service will be at 10:30 A.M. on Monday, May 2, 2022, at Grace Lutheran Church in Primghar with Pastor John Adams ~ officiating.

Burial with military honors presented by Chateau-Thierry Post of the American Legion will be at Pleasant Hill Cemetery in Primghar.

Visitation with the family present will be from 9:30 A.M. until service time on Monday, May 2, 2022, at Grace Lutheran Church.

MUSIC
“How Great Thou Art”
“Abide With Me”
Sung by: Rodd Holtkamp
Keyboard: Becca Moermond

Burdette William Charles Ebel, the son of William and Helen (Gaudian) Ebel was born January 16, 1928 in Paullina, Iowa. During his youth he was confirmed at St. John Lutheran Church in Germantown, Iowa. He received his education in Paullina and graduated from Paullina High School where he was active in football and baseball. On September 16, 1950 he was inducted into the United States Army and served during the Korean Conflict until his discharge on September 11, 1952. On February 8, 1951, he was united in marriage to Kathryn Behrens in Germantown, Iowa. For 30 plus years Burdette operated the Texaco Service Station in Primghar until becoming a rural mail carrier until he retired. His wife preceded him in death on May 26, 2008 in Primghar. Burdette remained in the family home until moving to the Community Memorial Health Center in Hartley in November of 2019. He passed away on Wednesday April 27, 2022 at the Mercy One Hospital in Primghar reaching the age of 94 years, 3 months and eleven days.
He was a member of the Grace Lutheran Church in Primghar, the Primghar Volunteer Fire Department for 30 years, lifetime member of the Primghar Golf and Country Club. He was an active member of the Chateau-Thierry Post of the American Legion in Primghar which was very important to Burt. He was an active supporter of all the Primghar High School sports and the Iowa Hawkeye sports and enjoyed bowling.
Burt is survived by a son, Tim and his wife, Jean Ebel of Arnolds Park, Iowa; a daughter, Lisa and her husband, Wayne Heil of Austin, Texas; a granddaughter, Andrea and her husband, Jason Fink of Omaha, Nebraska; three great grandchildren; Mckoy, Ayden and Josephine Fink; three sisters, Marge Mesner of Lake Park, Iowa, Adeline Traver of Paullina, Iowa and Marian Otto of Hartley, Iowa; two sisters-in-law, Helen Benson of Marshall, Minnesota and Luella Behrens of Primghar, Iowa also other relatives and many friends.
He was preceded in death by his wife, a son, Tom, parents, one brother, Wilbert Ebel and a sister, Darlene Hoermann, brothers-in-law and a sister-in-law.


To order memorial trees or send flowers to the family in memory of Burdette "Burt" Ebel, please visit our flower store.