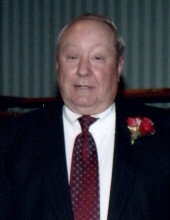 Visitation
with family present will be
after 1 P.M. until time of service on Sunday, September 15, 2019
at the church.

Arrangements under the care of the
Eldridge Family Funeral Home; Paullina, Iowa
BURLEIGH H. JURGENSEN
Burleigh Hartwig Jurgensen the son of Hartwig and Lydia (Withoelter) Jurgensen was born September 9, 1937 in O’Brien County near Calumet, Iowa. He attended school in Calumet, Iowa and graduated with the class of 1956. He went to Morningside College in Sioux City and attended for two years. He enlisted in the United States Army in 1959 and was discharged in 1961. In 1960, he was united in marriage to Mabel Otte and to this union four daughters and one son were born. After his discharge from the Army he returned to O’Brien County and farmed near Calumet for many years retiring in 2005 and moving to Sioux City, Iowa. He passed away on Thursday, September 12, 2019 at the Countryside Living in Sioux City reaching the age of 82 years and three days.
He was a lifelong member of the Zion United Church of Christ in Calumet, where he was baptized and confirmed. He was past President of the Paullina Jaycees. He was a player and later coach for the Paullina softball town team.
Burleigh is survived by his children, Karla (Mick) Lower of Sioux City, Iowa; Kim (Bob) Steinkamp of Primghar, Iowa; Brenda (Jeff) Burns of Spencer, Iowa; Beth (Cary) Wede of Lawton, Iowa and Blake (Roxann) Jurgensen of Paullina, Iowa; 8 grandchildren Justin, Rachel, Austin, Emily, Kayla, Jenna, Trenton, and Morgan; 5 great grandchildren, Myla, Easton, Emma, Corbin and Crew; one sister, LaVonne Benson of Sutherland, Iowa; a sister-in-law, Shirley Jurgensen of Sutherland, Iowa; also two nephews and one niece, other relatives and friends.
He was preceded in death by his parents, brother, Vernelle, a sister in infancy and brother-in-law, Bertel Benson


To Everything there is a season,
And a time to every purpose
under the heaven.
A time to plant and
a time to harvest………
Taken from Ecclesiastes, Chapter 3


As God sows and reaps
Each tiny seed in the soil,
He cares for us from first light
And far beyond our earthly toil.
To order memorial trees or send flowers to the family in memory of Burleigh Jurgensen, please visit our flower store.