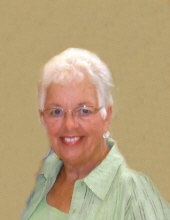 Memorials may be directed to Sanford Home Health & Hospice.

After today’s service relatives and friends
are invited to join the family in the
fellowship hall of the church.

Arrangements under the care of the
Vander Ploeg Funeral Home; Sheldon, Iowa
Carol Kay Van Kley, the daughter of Maynard and Martha Kruger was born on July 14, 1937, in Sibley, Iowa. She attended grade school in George, Iowa, and later attended Nettleton College in Sioux Falls, South Dakota. On March 3, 1961, she was united in marriage to Arlin Van Kley. They lived in Sheldon where she worked at H&R Block during tax season but otherwise was a devoted stay-at-home mother to Randy and Carmen.
Carol will be remembered for her love of sewing and baking, especially pies.
She enjoyed spending time with Arlin in Arizona each winter for over twenty-five years. Her greatest joy was spending time with family, grandchildren and great grandchildren. She was strong in her faith and was a member of the First Reformed Church in Sheldon. She went to be with her Lord on June 15, 2021, at her home in Sheldon, reaching the age of 83 years.
Those left to cherish her memories are her husband of 60 years, Arlin Van Kley of Sheldon, Iowa; her children: Randy and Brenda Van Kley of Spencer, Iowa and their daughter: Sara (Kaleb) Heckstein; Carmen and Ricky Holtrop of Sheldon, Iowa and their children: Carissa Holtrop, Jared (Cally) Holtrop, Jordan (Brittany) Holtrop, and Katlyn (Joel) Crooks; along with three great-grandchildren; a brother, Paul Kruger of Mankato, Minnesota and other relatives.
Carol is preceded in death by: her parents, two brothers: Ivan and Mike, and sister, Ellen.
To order memorial trees or send flowers to the family in memory of Carol K. Van Kley, please visit our flower store.