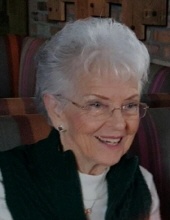 Carolyn Stamer
Carolyn was born Carolyn Johnston in Paullina, Iowa, January 31, 1931, the youngest of 4 older siblings. Carolyn passed away to be with Jesus on August 5, 2018. She married AJ Stamer in 1949 and from that union had 3 children, Julie, Diane and Paul. She leave 5 grandchildren, Mark, Matt, Kevin, Scott & Leah. Her family of children and grandchildren were the joy of her life.
Carolyn was raised in Iowa farming country and after marriage to Armond (AJ), raised her own family while working hard as a farmer’s wife and mom. Nearly all the food including beef, pork, chicken, and milk, and eggs, vegetables and fruit were raised on their farm.
In 1962 Carolyn and AJ moved to Chula Vista, California for a new life where they saw their children grow up, marry, and bear grandchildren. They attended Pilgrim Lutheran Church and were actively involved in its ministry.
As their children married and moved further north, Carolyn and AJ also eventually moved up to Escondido, California in order to join Emmanuel Faith Church where they were blessed and active in the senior’s ministry and took on a leadership role planning trips and bible studies.
As a young child, Carolyn gave her heart to Jesus and followed Him faithfully her whole life. It was her strongest desire and prayer that her children, grandchildren, and all that were to follow her in future generations, be saved by faith in Jesus Christ. As Carolyn passed into Heaven she found peace in knowing her prayers were answered.
To order memorial trees or send flowers to the family in memory of Carolyn Stamer, please visit our flower store.