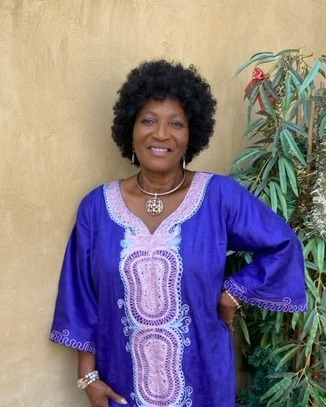 Services for Min. Catherine M. Dunn, age 70, of Sheldon who passed away on Thursday, November 3, 2022, at Sanford Sheldon Medical Center.  Thanksgiving memorial service and Wakekeeping will be held at 4 P.M. on Saturday, December 10, 2022, at Sheldon United Methodist Church in Sheldon.

To watch the livestream of the service please register at this link:

Burial will be held at Kakata, Liberia, West Africa at the Mlendough Farm on Bong Mines Road.

Visitation with family present will be from 5 - 7 P.M. on Friday, December 9, 2022, at the Vander Ploeg Funeral Home in Sheldon.

Her funeral service in Kakata, Liberia will be held at the Harvest Intercontinental Church in Kakata.

She was born on March 4, 1952 in Kakata, Liberia to Robert and Georgia (Bing) Mlendough.
Mom received her childhood education at the St. Augustine Episcopal school in Kakata, Liberia and later her high school diploma from the St. John Episcopal High School in Grand Cape Mount, Liberia. She then studied secretarial science at the College of West Africa, thereby affording her first job at the Civil Service Agency. While living in Monrovia, she met and married Colonel Joseph Martin Dunn in 1976 and they raised their family in Monrovia until his death in 1990. Catherine was enthusiastic about higher education and while working and raising a family, enrolled at University of Liberia to study Sociology and graduated with her Bachelor’s degree in 1982. While at the Civil Service Agency, she worked tirelessly and rose up in responsibility and rank over few decades to an Assistant Administrator by the late 1990s. She also pursued 9-month long trainings in Italy in 1982 and London in 1983.

In 1986, mom was introduced to a new faith in Jesus by some of her friends and visited the Logos ship and had a life changing experience that led her into a lifelong pursuit of faith, service, a deep love and enthusiasm for God. She and her family later affiliated with the Bethel World Outreach Center, now Harvest Intercontinental Ministries and served in many roles including Choir member, Praise and Worship member, Women’s ministry leader. She also served in Leadership positions in para church ministries including as the Pan African Christian Women Alliance National Coordinator for Liberia, as part of Association of Evangelicals of Liberia. Those positions afforded her the opportunities to travel to represent her organizations in Seoul, Korea in 1995, Lagos, Nigeria 1993 and Nairobi, Kenya 1989.

Mom became a young widow in 1990. Her strength as a formidable single mother, loyal friend and caring relative was undeniable. The Liberian civil war started shortly afterwards, and mom led a 3 family exodus of her single friends and their children to safety in another county. Through a tumultuous journey, our fearless mom was not satisfied until she finally led our immediate family to refuge in Freetown, Sierra Leone 7 months later. We stayed with our host family for 4 months then returned home to Monrovia. She resumed working for the Civil Service Agency under the interim government while staying active in Church work.

In 1995, mom visited the United States to see family and fell in love with New York City. She then made it her home for the next 25 years. During this time, she was employed with various home care agencies and enjoyed providing care to the elderly and Ill in the different boroughs of NYC and New Jersey.
She also helped plant and grow multiple African churches in New York. She always felt the calling to higher Christian ministry. Most recently, she returned to the Harvest Intercontinental Ministries in Staten Island and trained as a licentiate and ordained as a licensed minister in July 2021 and was studying for Ordination until her untimely death.

Additionally, at around age 60, mom’s dissatisfaction with the status quo made her to enroll into the Liberty University and obtain a master’s degree in Human Resource Administration and a second one in Christian Counseling graduating at 67 years old. She spent a few years in Sheldon, IA with her daughter and family while working on her counseling preceptorship at Sanford Sheldon Clinic. She unfortunately did not realize her dream to work formally as a Christian counselor. She worked for a year at the Field Crest Assisted Living Center in Sheldon as a care giver until returning to her beloved NYC.
Mom remained active in the St. John Episcopal Alumni Association and served as the NYC Chapter Coordinator to plan yearly reunion activities and unify her community of childhood friends.

She returned to Sheldon after her diagnosis in 2022 and enjoyed making memories with her family and friends until Jesus called her to glory.

To order memorial trees or send flowers to the family in memory of Catherine M Dunn, please visit our flower store.