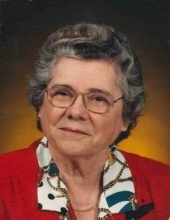 Services for Catherine E. Crouch, age 86, of Primghar, Iowa who passed away on Thursday, October 5, 2017 at Pearl Valley Care Center in Primghar. Graveside service will be held at 2 P.M. on Wednesday, October 11, 2017 at the Pleasant Hill Cemetery in Primghar.

Catherine E. Crouch, daughter of Pete and Paula (Rosas) Solitaire, was born March 6, 1931 in Brownsville, Texas. She received her education in Brownsville prior to moving to San Antonio, Texas where she was employed at Joskes Department Store as a fashion merchandiser. It was during this time she met Dale Crouch while he was stationed with the Air Force. The two married in 1952 and later settled in Primghar, Iowa.

Cathy had a passion for baking and she was well known for her variety of cakes she created for all occasions and especially enjoyed baking during the holiday season. She was employed at the Primghar Care Center for over 10 years.