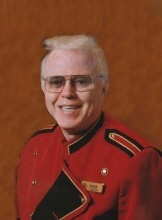 IN MEMORY OF
CHARLES D. FJELD

Visitation with the family present will be from 5:00 7:00pm
Friday, October 17, 2014 at the
Eldridge Family Funeral Home in Primghar.

Arrangements under the care of the
Eldridge family Funeral Home; Primghar, Iowa

Charles David (Chuck) Fjeld was born December 23, 1937 in Primghar, Iowa, the son of Alice (Berntson) Fjeld and Oscar Fjeld. He was baptized as an infant at Siloam Lutheran Church in Paullina, Iowa. He later confirmed his faith at Grace Lutheran Church in Primghar. He grew up on the family farm and attended Primghar Public School graduating in 1956. During his high school years he was very involved in the athletic program-football, basketball and track, he achieved an Iowa State Track Championship in his senior year; a record that stood for a number of years. Chuck started his college career as a journalism major at the University of South Dakota and then transferred to Wartburg College in Waverly, Iowa, where he completed a BA degree in social work. He served in the United States Army and was stationed at Ft. Leonard Wood, Missouri. Chucks first professional work was as a social worker in Newton, Iowa, where he had responsibility relating to the countys child welfare and adoption activities. He later accepted a very challenging position with the Cook County Juvenile Court and moved to the Chicago area where he lived and worked for many years. Gradually he was drawn to a different profession as hotel staff, focusing on hospitality as bellman, doorman and then bell captain, first in Chicago area hotel and then for many years in the Twin Cities. He continued in that profession until poor health forced him to retire. Throughout all of those years, Chuck was both an ardent sports fan and a dedicated movie and TV buff. He followed the careers of professional athletes and gifted actors and gathered a very large collection of movies and memorabilia.
He passed away on Wednesday, October 8, 2014 in Edina, Minnesota reaching the age of 76 years, 9 months and 15 days. He had been increasingly poor health for a number of years, suffering from Parkinsonian Syndrome.
Chuck is survived by his sister, Beverly (Ron) Lewison of Aurora, Illinois; his brother, Roger (Marilyn) Fjeld of Estes Park, Colorado; niece, Karen Fjeld; nephews, Steve and Todd Lewison and Douglas Fjeld; and a host of cousins and their families.
He was preceded in death by his parents and a nephew, Stuart Fjeld.
To order memorial trees or send flowers to the family in memory of Charles D. Fjeld, please visit our flower store.