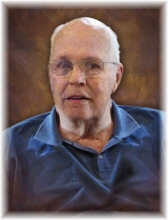 Charles "Chuck" Vaandrager, age 87, of Sheldon, Iowa, passed away on Saturday, August 18, 2018 at Sanford Sheldon Medical Center in Sheldon. Funeral Services will Tuesday, August 21, 2018 at 10:30 A.M. at the First Christian Reformed Church in Sheldon. Rev. Luke Wynja officiating. Burial to follow at East Lawn Cemetery in Sheldon. Visitation will be Monday, August 20, from 3:00 to 8:00 P.M. with the family present from 6:00 to 8:00 P.M. all at the First Christian Reformed Church in Sheldon. Memorials will be directed to Christian schools or directed to a ministry of your choice. Charles "Chuck" Cornelius Vaandrager was born on February 9, 1931 in Sheldon, Iowa. He was the son of Cornelius and Pearl (Rienstra) Vaandrager. He lived his youth in rural Sheldon where he attended Bell Country School. He later attended and graduated from Sheldon Christian Grade School and Western Christian High School in Hull, IA. Beginning in 1952, Charles served in the United States Army for 2 years and was honorably discharged. He was united in marriage to Kathryn Anema of Sanborn, Iowa on August 16, 1963, in Sheldon. They lived in Sheldon where Charles was an accountant for Big 4 and then transferred to Fort Dodge, IA, where he continued in accounting. They moved to Worthington, MN and Charles was the assistant manager for the Co-op Elevator. In 1977 he became the general manager for the Farmers Co-op. Ass'n in Boyden where he worked for 18 years before retiring and moving back to Sheldon. Charles was a member of the First Christian Reformed Church in Sheldon where he served as an Elder, Deacon and Cadet Leader. He served on the boards of both Sheldon Christian School and of Dordt College. He was a mentor for Loving Help of Love INC and a lesson leader and mentor for Crossroads Ministries. He also attended Prairie Queen Kiwanis and served on many other boards and committees. Charles was a quiet leader and a loving, caring husband, father and grandfather who impressed a passion for Christ on his family and shone a light on the many others he interacted with. Even as he was challenged with Parkinson's disease for the last 12 years of his life, his faith never faltered and he continued to lead his family in the way of the Lord. He passed away on Saturday, August 18, 2018 at Sanford Sheldon Medical Center in Sheldon. Those left to cherish his memories are his wife of 55 years, Kathryn Vaandrager of Sheldon, IA; 4 children and their spouses, Debra (Mark) Van't Hul, Connie (Arlo) Heynen, Mark (Rochelle) Vaandrager, David (Brenda) Vaandrager; 12 grandchildren, Tyler, Christa (Jon DeVries), Megan Van't Hul; Eric (Krista), Katie, Adam (Jill), Rachel Heynen; Chelsea (Gabe Doornink), Keanna, Mitchell Vaandrager; Charlie, Maggie Vaandrager; 3 great-grandchildren, Camden, Sophie Heynen; Emyrson Doornink; one brother, Dr. Vernon (Carolyn) Vaandrager; 4 sisters, Evelyn Beimers, Cynthia (Don) Hanenburg, Leona Broers, Glenda Vaandrager. He was preceded in death by his parents; parents-in-law; 2 brothers-in-law, Thurlow Beimers and Tom Broers. In Loving Memory Of Charles "Chuck" Vaandrager Born: February 9, 1931 Passed Away: August 18, 2018 Age: 87 years, 6 months and 9 days FUNERAL SERVICE Tuesday, August 21, 2018 at 10:30 A.M. First Christian Reformed Church, Sheldon, Iowa Family Prayer Service at 10:15 A.M. OFFICIATING Rev. Luke Wynja MUSIC Organist: Yvonne Bolkema Special music by the Grandchildren: "When Peace Like a River" Congregational Songs Processional: "What a Friend We Have in Jesus" During the service: "Rock of Ages, Cleft for Me" "How Firm a Foundation" Recessional: "By the Sea of Crystal" CASKET BEARERS Mark Vaandrager Dave Vaandrager Mark Van't Hul Arlo Heynen Tyler Van't Hul Eric Heynen Adam Heynen Mitchell Vaandrager Charlie Vaandrager INTERMENT East Lawn Cemetery, Sheldon, Iowa Following interment, the family invites all for fellowship and lunch at the church. ARRANGEMENTS BY Andringa Funeral Home Sheldon Funeral Service Larry R. Andringa, Funeral Director

To order memorial trees or send flowers to the family in memory of Charles Vaandrager, please visit our flower store.