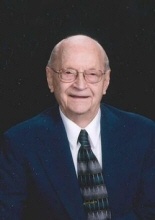 MUSIC
Because He Lives
Sung by: Pastor Paul Van Maaren

After todays service, relatives and friends are invited to
join the family in the fellowship hall of the church.

CLARENCE MARVIN DYKSTRA
Clarence Marvin Dykstra, son of Mason and Clara (Talsma) Dykstra, was born on July 18, 1926, near Hospers, IA. He attended rural school and graduated from Sheldon High School in 1943. On January 29, 1948, he married Gertrude Nels in Sheldon. They farmed south of Sheldon until 1990, when they retired into Sheldon. Clarence attended the Hospers Reformed Church as a youth, and has been a member of the First Reformed Church of Sheldon since his marriage. He was actively involved in the church as an elder and a deacon. Also he taught catechism and Sunday School with his wife, Gertrude. He was a great encourager to others through visits, phone calls, cards and providing rides for many. During his retirement years, he was a hospice volunteer and also assisted kids with reading at East Elementary school. He had a kind, gentle, comforting way about him, putting people at ease and letting them know that he cared about them.
Clarence leaves to cherish his memory his three daughters: Glenda and Arnie Hoogers of Sheldon, Carolyn and Jerry Hoogers of Maple Grove, MN, and Julie Dykstra of Loves Park, IL. Also by one daughter-in-law, Lori Haldorson Dykstra, of Blaine, MN. Also seven grandchildren: David and Shelley Hoogers, Laura and Jeff Rehfeld, Jon and Tonja Hoogers, Jennifer and Dan Tarnowski, Sara and Chad Ruter, James and Kerri Hoogers, Emily Dykstra, and 12 great-grandchildren. Sisters-in-law, Edna Dykstra, Jeanette Van Hal, Theresa and Gary Meendering, Gertrude Nels, and Evelyn Nels. A special friend, Sherry Vander Pol.
He was preceded in death by wife, Gertrude, son, Robert, his parents, brothers, Gerritt and Maynard, sisters, Tillie Ten Clay, Jennie Ten Clay, Margaret Dykstra, also a sister and brother in childhood.
Psalm 100
Make a joyful noise unto the Lord, all ye lands.
Serve the Lord with gladness: come before his presence with singing.
Know ye that the Lord he is God: it is he that hath made us,
and not we ourselves; we are his people, and the sheep of his pasture.
Enter into his gates with thanks-giving, and into his courts with praise:
be thankful unto him, and bless his name.
For the Lord is good; his mercy is everlasting;
and his truth endureth to all generations.
To order memorial trees or send flowers to the family in memory of Clarence Marvin Dykstra, please visit our flower store.