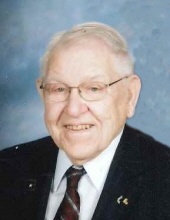 Visitation with family present will be from 5 - 7 P.M. on Friday, December 29, 2017 at the Eldridge Family Funeral Home in Paullina.

Flag presentation by Russell West Post of the American Legion of Paullina at the church.

Memorials may be directed to St. John Lutheran Church in Germantown or a charity of your choice.

After the graveside service relatives and friends are invited to join the family at the Germantown Community Building.

Clifford John Puhrmann was born March 29, 1922 in Palo Alto County, Aryshire, Iowa to Arthur and Jennie (nee) Long Puhrmann. He moved to the family farm north of Cleghorn at the age of four and lived there until he retired from farming and moved to Germantown, Iowa in August 1989.

Clifford received his education through the 9th grade in Cleghorn. He was baptized and confirmed at Zion Lutheran Church in Paullina, Iowa on May 16, 1943. He was called to serve his country in the United States Army in December 1943. He was deployed overseas from October 1944 until honorably discharged as a Staff Sergeant in May 1946, serving in France and Germany. He was united in marriage to LaVera Kruse on November 13, 1949. Besides farming, he drove school bus for six years and served on the Marcus Co-op Board for nine years. Clifford was a member of St. John Lutheran Church since 1949, where he was an Lutheran Laymen’s League member/leader, served on Voters Assembly, Parent Teacher League, and attended Silver and Gold.