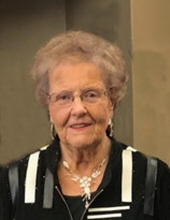 CONGREGATIONAL HYMNS
“What A Friend We Have In Jesus”
“On Eagle’s Wings”
“Precious Lord, Take My Hand”
“How Great Thou Art”
Organist: Angela Johannsen

Colleen R. Hattermann, was born on July 1, 1936 in Paullina, Iowa to Frank and Eleonora (Daniels) Hinz. She was baptized in the Christian faith in Zion Lutheran Church. She attended Zion Lutheran School and was confirmed in May 1950. She graduated from Paullina High School in May of 1954. After graduation attended business school in Omaha, Nebraska and started working at Dun and Bradstreet Credit Bureau in Sioux City. Colleen was united in marriage to Alvin Hattermann on February 1, 1956. After their marriage the couple lived in El Paso, Texas until August of 1956 Colleen returned home while Alvin was stationed in Italy. The couple started farming in 1958 until retiring in 1995. Colleen passed away on Monday, December 9, 2019 at MercyOne Medical Center in Sioux City reaching the age of 83 years, 5 months and 8 days.
Colleen was a lifelong member of Zion, she served on Evangelism Board, taught Sunday school, belonged to young adults and sang in the choir. Colleen enjoyed attending grandchildren and great grandchildren’s school activities, playing cards, crafting and knitting.
Left to cherish Colleen’s memory is her husband of 63 years, Alvin; two daughters and their husbands, Pam and Duane Ricke of Sioux Falls, South Dakota and Carla and Scott Wise of Paullina; six grandchildren, Katie (Drew) Triplett, Korey (Lindsey) Wise both of Primghar, Austin (Cailin) Wise of Paullina, Jenn (Eric) Neisteadt of Sioux Falls, South Dakota, Kelly Ricke and Jill Ricke both of Sioux Falls; five great grandchildren, Addison, Braxton and Hudson Triplett and Reece and Grace Wise; sister-in-law, Joanne Hinz; also nieces, nephews, other relatives and friends.
Colleen was preceded in death by her parents, Frank and Eleonora Hinz; son, Terry Hattermann and brother, Glenn Hinz.
To order memorial trees or send flowers to the family in memory of Colleen R. Hattermann, please visit our flower store.