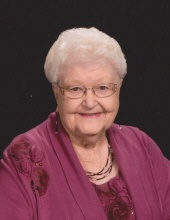 IN LOVING MEMORY OF
CORNELIA OLDENKAMP

MUSIC
“It Is No Secret (What God Can Do)”
Sung by ~ Dyan Lenderink
CONGREGATIONAL HYMNS
“How Great Thou Art”
“Faith of Our Fathers”
“Amazing Grace”
Organist: Jett Korver

Cornelia Oldenkamp, the daughter of Cornelius and Dina (Buysman) Lode was born on April 18, 1926 on a farm in Baker Township of O’Brien County, Iowa. She received her education in a country school near Ritter, Iowa where she grew-up. On March 11, 1947, she was united in marriage to John Oldenkamp on the Lode Family Farm where they made their home. Cornelia was a mother and a homemaker, along with helping her husband with the chores and farm work. In 1983, John and Cornelia moved into Sheldon. John preceded her in death on July 5, 1986. Cornelia continued to keep busy by volunteering at the Sanford Sheldon Senior Care for 25 years. Cornelia passed away on Monday, February 10, 2020, at the Sanford Sheldon Medical Center in Sheldon reaching the age of 93 years, 9 months and 22 days.
Cornelia was a member of the First Reformed Church in Sheldon. She enjoyed camping, fishing crocheting, playing cards and games. She bought a camper and enjoyed going camping with her friends and to Music Festivals. Her greatest joy was spending time with family, grandchildren and great- grandchildren.
Left to cherish Cornelia’s memory are her children and their spouses, Deann and Phil Kragt of Sheldon, Iowa; Carol and David Reekers of Sioux Center, Iowa and Larry and Laura Oldenkamp of Ashton, Iowa; seven grandchildren, Kenneth (Paula) Van Aalsburg, Dina (Jeff) Vander Wilt, Daniel (Kim) Oldenkamp, Timothy (Lisa) Oldenkamp, Michael (Danielle) Oldenkamp, Becky Oldenkamp, John (Brooke) Oldenkamp; sixteen great-grandchildren, Ashley (Jett) Korver, Kelsey Van Aalsburg, Alexis, Aubree, Addison, Ty, Ezra, Emily, Lucas, Elizabeth, Lindsey, Jacob, Matthew, Anna, Lydia and Emmett; and a sister, Marie Van Veldhuizen of Sheldon, Iowa; a special friend, Glenn Doorenbos of Sibley, Iowa and other relatives and friends.
Cornelia was preceded in death by her husband, her parents, a grandson Jeremy Reekers; seven brothers, Werner, John, Dick, Henry, Gerrit, Herman and Carl and a brother-in-law, Gilbert Van Veldhuizen.
To order memorial trees or send flowers to the family in memory of Cornelia Oldenkamp, please visit our flower store.