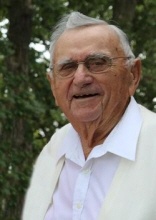 IN LOVING MEMORY OF
DALE A. REESE

Visitation with family present will be
from 12 noon until time of service on Monday
December 26, 2016 at the United Church of Primghar.

CONGREGATIONAL HYMNS
Amazing Grace
His Eye Is On The Sparrow
Organist: LaNan Eldridge

DALE A. REESE
Dale Armstrong Reese Sonny, the son of Lloyd and Eva (Armstrong) Reese was born on June 8, 1924 in St. Peter, Minnesota. At the age of five the family moved to a farm northeast of Mallard, Iowa. He attended rural school in Palo Alto County. On June 12, 1945, he was drafted into the United States Army and was honorably discharged on November 18, 1946. In 1951, Dale was united in marriage to Wilma Hansen at Primghar, Iowa. After their marriage the couple farmed east of Primghar. Dale and Wilma remained on the family farm until moving to Sanborn in October of 2016. Dale passed away on Thursday, December 22, 2016 at Baum Harmon Mercy Hospital, reaching the age of 92 years, 6 months and 14 days.
Dale was proud of his chosen occupation he was truly the definition of a farmer. He loved the farm and in retirement years spent a great deal of time tinkering and puttering around the farm. In early retirement, Dale enjoyed woodworking and continued to do so until it began to affect his breathing. He was light on his feet and he and Wilma enjoyed dancing. Dale had a keen sense of humor and was often the instigator of many practical jokes. He was a 70-year member of the American Legion, and a longtime member of Onyx Lodge #419 A.F.A.M., and Abu Bekr Shrine.
Left to cherish Dales memory is his wife of 65 years, Wilma; their children, Bill (Amy) Reese of Newaygo, Michigan, Doug Reese (Linda Severson) of Hartley, Iowa and Carol VanDer Sluis (Tom Blasco) of Reno, Nevada; four grandchildren, Nick (Amy) VanDer Sluis, Jess (Tees) VanDer Sluis, Stacy Nelson (Matt) and Shelly Stark (Tony); five great grandchildren, Kaitlyn, Cheyenne, Gabe, Zoey and Austin.
Dale was preceded in death by his parents, his sister, Eva Jean Suz and a brother, William Rasty.

-Barbara W. Weber
To order memorial trees or send flowers to the family in memory of Dale Reese, please visit our flower store.