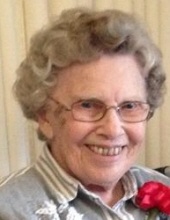 Darleen Marie Bliss, the daughter of Henry and Edna (Bonsall) Frohwein was born December 8, 1921 in rural Sheldon, O'Brien County, Iowa. She attended the Nelson country school for eight years, graduated from Sheldon High School in 1939 and Sheldon Jr. College in 1941 with a teacher's degree. She also attended one summer session at Cedar Falls Teachers College (University of Northern Iowa). She taught seven years at the Nelson school. She was an active 4-H member while growing up. Darleen met Clinton Bliss prior to World War II and after the war, on October 20, 1945, they got married at the Little Brown Church in Nashua, Iowa. They moved to Slayton, Minnesota where they bought a farm and farmed there for 33 years. After they retired from farming, they moved to Primghar, Iowa and later Sheldon, Iowa. They were blessed with one daughter, LaNan, and husband, Peter Eldridge, four grandchildren, and six great grandchildren.

In 2011, Darleen moved to the Christian Retirement Home and later to Fieldcrest Assisted Living, both in Sheldon. Her health deteriorated and in 2015, she moved to the Heartland Care Center in Marcus, Iowa where she passed away on November 15, 2017, reaching the age of 95 years, 11 months and 7 Days.

Darleen was an active member of the Methodist church in Sheldon, Slayton and Primghar. She taught Sunday School, Release Time, sang in the choir, a member of King's Daughters, United Methodist Women, and various church circles. Her hobbies were making quilts, 51 total, most of them hand quilted, crocheting, knitting, sewing, (which included five wedding dresses), various crafts, playing bridge and other card and board games. She and Clinton made board games, one of those being, Wahoo, that she enjoyed playing with friends, grandchildren, and great grandchildren. She played billiards in a women's league in Arizona and at home with Clinton and their grandchildren.

They enjoyed camping at Cutty's at Lake Okoboji with friends and grandchildren. They also traveled on several caravan trips. She and Clinton spent many winters in Safford and Mesa, Arizona and Texas. They traveled in all the states except Maine. They enjoyed short bus trips as well.

Darleen was preceded in death by her husband, Clinton on April 8, 2007, her parents, and her sister and husband, Lela and Lawrence Betz.
To order memorial trees or send flowers to the family in memory of Darleen Marie Bliss, please visit our flower store.