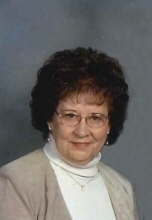 IN LOVING MEMORY OF
DARLENE HOLLANDER

Visitation with family present will be
from 5 7 P.M. on Wednesday, February 8, 2017
at the Vander Ploeg Funeral Home in Boyden.

DARLENE HOLLANDER
Darlene Hollander, the daughter of Peter and Effie (Korthals) De Boer was born on March 15, 1936 in Boyden, Iowa. She received her education and graduated from Boyden High School in 1954. After high school Darlene began working at DEMCO as a bookkeeper. While working, she met John Hollander and they later got married on June 7, 1957 in Spencer, Iowa. After their marriage, she continued to work at DEMCO and she later worked for Mr. Bs, Glens Sport Center and Childrens World all in Sheldon. The couple moved to Fieldcrest in February of 2015. Darlene passed away on February 6, 2017 at Sanford Sheldon Medical Center reaching the age of 80 years, 10 months and 21 days.
She was an active member at St. Paul Lutheran Church in Hull where she taught Sunday School and was a member of the ladies aide. She enjoyed growing roses on the farm, playing piano, sewing cooking her famous buns and cinnamon rolls. Darlene was known to try to please and help everyone she could. She was a seamstress and enjoyed listening to gospel music and dancing. Her family was an important part of her life.
Left to cherish Darlenes memory is her husband of 59 years, John of Sheldon; children and their spouses, Rick and LaWana Hollander of Cameron, Wisconsin and their family, Christopher (Laura) their children, Delilah and Erin, Joshua (Lori) and their son, Colton, Jeremy (Kara) and their children, Tyson and Haylee and Renae and Brett Bahrenfuss of Sioux Falls, South Dakota and their family, Derek (Ashley) and daughter, Teagyn and Dalton Bahrenfuss; brother, Harold De Boer of Olathe, Kansas; sister, Dorothy (Ivan) Van Ommeran of DeWitt, Iowa; also nieces, nephews, other relatives and friends.
Darlene was preceded in death by her parents, great grandson, Mason Hollander and sister, Jean (John) Doorenbos.
To order memorial trees or send flowers to the family in memory of Darlene Hollander, please visit our flower store.