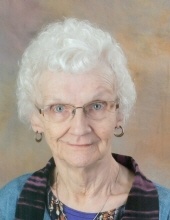 Arrangements are under the care of the Vander Ploeg Funeral Home in Sheldon.
Online condolences can be sent to eldridgefamilyfuneralhomes.com

Darlene Lois Kreykes Callenius entered into Heaven on her 92nd birthday on Friday, July 31, 2020 in Galveston, Texas. Darlene was the oldest of three children born to John H. and Nellie Kroese Kreykes on July 31, 1928 in Sheldon, Iowa. Her early years were spent attending school and graduating with the class of 1946. Family has always been the most important part of her life so playing with numerous cousins in Sheldon, Orange City, and Sioux Center, Iowa was how she spent her childhood.
On March 22, 1944 she met a tall good-looking young man from Granville, Iowa, who was at a National Guard Drill on his seventeenth birthday. He quickly asked her out on a date making it clear to her that he never asked a girl out the second time if they refused the first time. When she told him that she already had a date, he immediately asked her out again. This started a courtship that lasted until she married Donald D. Callenius on her eighteenth birthday, July 31, 1947, at the First Reformed Church in Sheldon, Iowa.
The couple honeymooned in the Black Hills of South Dakota, and upon returning from their honeymooned they moved in the little white house on the Callenius family farm at Granville, Iowa. Don became engaged in farming the family farm with Darlene helping with farming, raising livestock, and gardening.
On April 1st, 1948, their first child was born, and they named him Douglas Lee Callenius. On July 22, 1949 a second son was welcomed into their family and they named him Daryl Lee Callenius. Darlene, along with Don, became involved with the Scouting program where she became a Den Mother for Douglas and Daryl.
In 1960 Don had to give up farming due to health concerns. This opened the door for Don going to work for the Boy Scouts of America which took them away from the farm. Their first move was to Humboldt, Iowa.
While living in Humboldt she continued with her involvement in Boy Scouting, but broadened her involvement with Girl Scouts, directing summer camp for several summers. Tragedy struck when, on September 22, 1962, Douglas lost his life when on a church hayride.
The family next moved to Topeka, Kansas where Don continued to advance his career with the Boy Scouts. While living in Topeka a great joy came to the family with the adoption of a daughter - Donna Lee Callenius on May 28, 1965.
Over the following years Don and Darlene moved several more times with Don’s career advancing with each relocation. They lived in Omaha, NE; Kansas City, MO; Massillon, Ohio; New Jersey and Grapevine, Texas. After Don’s passing in 1985 Darlene continued to live in Grapevine for several more years then moved to Galveston, Texas to be near her daughter, Donna.
Throughout her life her faith in God never wavered. She was active in her spiritual journey through singing in the choir, Bible Study, Sunday school, and active outreach ministries including Walk to Emmaus and Kairos ministry in prisons. She also had a fierce passion for sports, baseball being her favorite.
Darlene was preceded in death by her husband Donald Callenius, son Douglas Callenius, son Daryl Callenius, grandparents; Jan H. and Magdalene Waanders Kreykes, Peter and Elizabeth VanZnten Kroese, parents John H. and Nellie Kroese Kreykes, and sister Shirley Kreykes Watters. She is survived by her son Daryl’s wife Cynthia Houseman Callenius of Geneva, Nebraska; Daughter Donna Callenius Lang, and husband David Lang (Grandchildren Danielle Marie and Douglas Anthony Lang) of Galveston, Texas; Grandsons Chadwick Allan and wife Stacy Maughan Callenius of Norfolk, Nebraska (and great grandchildren Jason John and Kylie Beth Callenius); Paul Douglas and wife Wendi Coker Callenius of Scottsbluff, Nebraska; Brother-in-Law Merle Watters of North Carolina, Brother Rodney and wife Joanne Blank Kreykes of Rockwell City, Iowa, nieces and nephews.
To order memorial trees or send flowers to the family in memory of Darlene Lois (Kreykes) Callenius, please visit our flower store.