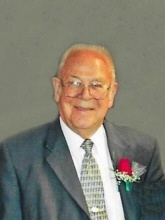 Visitation will be after 4 P.M. Monday, September 15, 2014
with family present from 5 7 P.M.
at the Eldridge Family Funeral Home in Primghar.

CONGREGATIONAL HYMNS
Take The Name of Jesus With You
When We Walk With The Lord, Trust and Obey
Organist: Margaret Anderson

After todays graveside service, relatives and friends are invited to join family in the fellowship hall of the church.

Arrangements are under the care of the
Eldridge Family Funeral Home
Primghar, Iowa.

DARRELL G. DEBOOM
Darrell Gene DeBoom, the son of Peter and Jeanette (Roetman) DeBoom was born on January 2, 1928 in Sanborn, Iowa. He graduated from Archer High School in 1946 and went on to further his education receiving a teaching degree at Westmar College. He went on to teach for three years before going back to receive his Master of Arts Degree in Education from the University of Northern Iowa. He enlisted into the United States Army serving from 1946 to 1948, where thirteen months was spent across seas in Korea. Darrell was united in marriage to Phyllis Sohn on August 24, 1948 in Sanborn, Iowa. After their marriage Darrell was an educator across the state until he retired in June of 1994. In November of 1994, the couple moved to Primghar. He passed away on Friday, September 12, 2014 at the Prairie View Home in Sanborn, reaching the age of 86 years, 8 months and 10 days.
Darrell was a member of the United Church of Primghar, where he served on many boards; he was the church lay leader and the treasurer after the United Churchs fire. He also was a member of the Gideons for over 20 years. He was an active community member as he served on the Primghar Library Board for 18 years and the Primghar Planning and Zoning. He enjoyed traveling with Phyllis and woodworking.
Darrell is survived by his wife of 66 years, Phyllis of Primghar; two sons and their spouses, Jerry and Carol DeBoom of Independence, Iowa and Dennis and Terry DeBoom of Arlington, Texas; four grandchildren, Jason, Jessica, Lee and Ross DeBoom; one great grandson, Benjamin DeBoom; siblings, RoseAnn and Gerald Wegter of Archer, Iowa; Marlene Zevenbergen of Sanborn, Iowa; Gary and Jean DeBoom of Algona, Iowa and Ronald and Jennifer DeBoom of Sanborn, Iowa; also other relatives and friends.
Darrell was preceded in death by his parents, a sister, Maurene Miller; a brother-in-law, John Zevenbergen; a niece, Marilyn Miller and a nephew, Bob DeBoom.
To order memorial trees or send flowers to the family in memory of Darrell DeBoom, please visit our flower store.