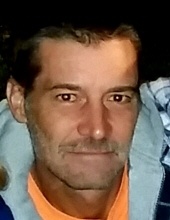 David A. Heithus
Paullina, Iowa
Services for David A. Heithus, age 54, of Paullina who passed away on Monday, October 11, 2021, at the Aver-McKennan Hospital in Sioux Falls, South Dakota. His funeral service will be 2:00 P.M. on Friday, October 15, 2021, at St. John Lutheran Church in Germantown with Rev. Donald Erickson ~ officiating.
Burial will be at St. John Lutheran Cemetery in Paullina with military honors presented by Russell West Post of the American Legion.
Visitation with family present will be from 5 – 7 P.M. on Thursday, October 14, 2021, at the Eldridge Family Funeral Home in Paullina.

IN LOVING MEMORY OF
DAVID A. HEITHUS

David A. Heithus
David Allen Heithus, the son of Lloyd and Glenda (Cline) Heithus was born August 6, 1967 in Cherokee, Iowa. He attended school in Cherokee until the 10th grade then the family moved to rural Paullina and David graduated from Paullina High School in 1986. He enlisted in the United States Air Force in June of 1986 and served in Korea, South Carolina, Hawaii and Washington D.C. as well as the Gulf War. He was discharged in June of 1995. In 1990, he was united in marriage to Lisa Terpstra and to this union four children were born. After his discharge from the Air Force the couple moved to Spencer, Iowa where he was employed at Overhead Door Company and Morton Buildings until illness forced his retirement. He recently made his home in Paullina. He passed away on Monday, October 11, 2021 at the Avera-McKennan Hospital in Sioux Falls, South Dakota, reaching the age of 54 years, two months and five days.
He was baptized on August 27, 1967 and later confirmed on April 4, 1982 at the Trinity Lutheran Church in Cherokee and had transferred his membership to the St. John Lutheran Church in Germantown, Iowa where he was currently a member. He enjoyed woodworking, scuba diving, floating down a river and anything being outside.
David is survived by three children, Chris Heithus of Goose Creek, South Carolina, Sarah Heithus in Texas and Aaron Heithus of Goose Creek, South Carolina; his mother, Glenda Heithus of Paullina, Iowa; sisters, Tammy (Ron) Krogman of Germantown, Iowa; Malinda Thompson of Paullina, Iowa; brothers, Butch (Gloria) Heithus of Crestview, Florida and Brian (Nancie) Heithus of Milford, Iowa; a sister-in-law, Brenda Heithus of Germantown, Iowa; also nieces, nephews and other relatives and friends.
He was preceded in death by his daughter, Marissa on July 11, 1994, his father, Lloyd and brother, Jeff.
To order memorial trees or send flowers to the family in memory of David A. Heithus, please visit our flower store.