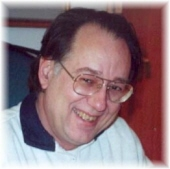 David Lee Enfield, age 65, of Sheldon, Iowa, passed away on Friday, October 28, 2016 at Sanford Sheldon Medical Center in Sheldon. Funeral Services will be Wednesday, November 2, 2016 at 11:00 A.M. at our Savior Lutheran Church in Sheldon. Rev. George Clausen officiating. Graveside Services will be Wednesday, November 2 at 3:30 P.M. at Glenwood Cemetery in Mankato, Minnesota. Visitation will be from 9:00 to 10:45 A.M. with the family present at the church. David Lee Enfield was born on February 25, 1951 in Mankato, Minnesota. He was the son of Elmer and Elise (Nielsen) Enfield. He lived his youth in Lake Crystal, Minnesota, where he attended school. He attended Northfield High School, graduating in 1969. David enlisted in the United States Navy on August 24, 1972 and was honorably discharged on November 27, 1974. He attended Mankato State University, graduating in 1978 with a bachelor's degree in finance and economics, and master's degree in finance and labor relations. He married Ruth Wear of Nicollet, Minnesota on June 10, 1978. They lived in Mankato, Minnesota and in many small towns in southern Minnesota. In August of 1990, they moved back to Mankato, where they made their home. They divorced in 2001. David worked as a manager in human resources for the Department of Transportation for 10 years and then worked in Zumbrota, Minnesota for Dairy Farmers of America as a human resources manager. In 2004, David moved to Sheldon, Iowa, where he purchased the Sunset Motel which he owned and operated to the present. David enjoyed traveling in the United States and overseas. He did charity work in the Philippines. He was an active member of Our Savior Lutheran Church in Sheldon. David was a light hearted person and an opinionated and spirited conversationalist. He passed away on Friday, October 28, 2016 at Sanford Sheldon Medical Center in Sheldon. Those left to cherish his memories are his children, Elise Louise (Danny) Jordan of St. Cloud, MN, Kristin Ann (Nicholas) Kilgren of Jordan, MN, Nicole Elizabeth Reitsma of St. Paul, MN, and Michael David Enfield of Madison Lake, MN; seven grandchildren; one brother, Larry (Pamela) Enfield of Denison, MN; two sisters, Linda Hruska of Waseca, MN and Diane Levesseur of Maine. He was preceded in death by his parents, brother-in-law, Gerald Hruska and niece, Carol Bronstad. In Loving Memory Of David Lee Enfield Born: February 25, 1951 Passed Away: October 28, 2016 Age: 65 years, 8 months and 3 days FUNERAL SERVICE Wednesday, November 2, 2016 at 11:00 A.M. Our Savior Lutheran Church, Sheldon, Iowa Family Prayer Service at 10:45 A.M. OFFICIATING Rev. George Clausen MUSIC Organist: Gayle Ten Haken Congregational Songs "How Great Thou Art" "On Eagles' Wings" "I Am Trusting Thee Lord Jesus" CASKET BEARERS Family INTERMENT 3:30 P.M. Glenwood Cemetery, Mankato, Minnesota MILITARY HONORS Mankato Area Memorial Veterans Squad Bag Pipes by Mike Breidenbach Song: "Amazing Grace" ARRANGEMENTS BY Andringa Funeral Home Sheldon Funeral Service Larry R. Andringa, Funeral Director

To order memorial trees or send flowers to the family in memory of David Enfield, please visit our flower store.