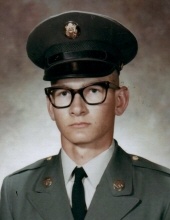 David F. Runge
Sutherland, Iowa
Funeral services for David F. Runge, age 70, of Sutherland, Iowa who passed away on Monday, September 23, 2019 at Pearl Valley Nursing Home in Sutherland. His funeral service will be at 11:00 A.M. on Saturday, October 5, 2019 at Eldridge Family Funeral Home in Paullina with Marjorie Feltman ~ officiating.
Burial will be at Liberty Township Cemetery in Calumet.
There will be no visitation.

David Friedrich Runge, the son of Fritz and Ella (Puhrmann) Runge, was born March 8, 1949, in Cherokee, Iowa. The youngest child of 8 brothers and sisters, he grew up on various farms around the Larrabee, Iowa, and Calumet, Iowa, area. David attended various schools in the area and graduated from Sutherland High School in 1967. He went on to attend the Universal Trades School in Omaha and graduated with an auto mechanics degree. David was then drafted into the United States Army during the later years of the Vietnam War. He completed his basic training at Fort Lewis. During the war, he was stationed at Pleiku near the Cambodian and Laosian borders and worked in supply and maintenance. David was later discharged around 1971 after his mother fell ill. He would highlight some of his experiences about being in Vietnam from time to time. One particular experience he shared was dealing with rats in his boots and falling asleep to the sight of tracer rounds in the skyline. David was proud of his service to his country and had no regrets about his service.
When David returned to Iowa, he began a long career as a truck driver for Weinrich Trucking, seeing a lot of the United States. He won a safety award for no accidents, which he was very proud of. When he retired from trucking, he worked for Ag Partners and various farmers as a hired hand in the field from time to time. He lived on his acreage outside of Sutherland, Iowa, and enjoyed the solitude that came with it in his log cabin house.
In February 2019, he entered Pearl Valley Rehabilitation and Nursing Home in Sutherland, Iowa. David passed away there peacefully on Monday, September 23, 2019, after a short battle with cancer.
David enjoyed a lot of things, but, most importantly, he cherished the time with his family.
Left to cherish his memory are his sisters, Delores Shilling of Sutherland, Iowa, and Shirley Runge of Cherokee, Iowa; 9 nieces and nephews; 7 great-nieces and nephews; 5 great-great nieces and nephews.
David was preceded in death by his parents, Fritz and Ella; sisters, Dorothy Beermann, Alice Halstrom, and Betty Strilka; brothers, Dale and Roger; brothers-in-law, Alvin Beermann, Vernon Halstrom, Oscar Mews, Earl Shilling, and James Strilka; nephew, Dean Beermann; family friend, Larry Towe; and his paternal and maternal grandparents.
To order memorial trees or send flowers to the family in memory of David F Runge, please visit our flower store.