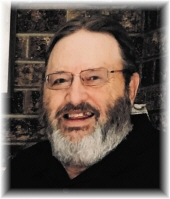 David Jon Hohbach, age 62, of Matlock, Iowa, passed away on Tuesday, July 3, 2018 at his home in Matlock. Funeral Services will be Friday, July 6, 2018 at 11:00 A.M. at the Andringa Funeral Home Sheldon Funeral Service in Sheldon. Pastor George Clausen officiating. Burial to follow at Greenwood Cemetery in Matlock, Iowa. Visitation will be Thursday, July 5, 2018 from 3:00 to 8:00 P.M. with the family present from 6:30 to 8:00 P.M. at the Andringa Funeral Home Sheldon Funeral Service in Sheldon. David Jon Hohbach was born on May 24, 1956 in Cherokee, Iowa. He is the son of Wilmer and Ruth (Miller) Hohbach. He lived his youth in rural Marcus, Iowa. He was baptized and confirmed at the Trinity Lutheran Church in rural Marcus, Iowa. David attended school and graduated from Marcus High School. He attended Northwest Iowa Community College in Sheldon, Iowa and received a degree in Diesel Mechanics. He was united in marriage to Gracia DeZeeuw of Sheldon, Iowa on July 15, 1978 at the Trinity Lutheran Church in rural Marcus. They lived in Sheldon and Matlock, Iowa. David worked for Vogel Tire in Sheldon as a Mechanic and transferred to Farmer's Coop in Sheldon where he worked for 34 years as a tank wagon driver. He always had candy suckers for the kids when he stopped and was known as the "Sucker Man". He started farming in 1999 and enjoyed planting and harvesting with his family. David also enjoyed four-wheeling, vacationing at the Black Hills and Utah, and spending time with his grandchildren. He was a member at Our Savior Lutheran Church in Sheldon since 2007. David passed away on Tuesday, July 3, 2018 at his home in Matlock. Those left to cherish his memories are his wife of 40 years, Gracia Hohbach of Matlock, IA; his son, Darwin Hohbach of Sheldon, IA; his daughter and son-in-law, Dana and Brandon Lowder of Spencer, IA; six grandchildren; his mother, Ruth Hohbach of Marcus, IA; two brothers and sisters-in-law, Bruce and Jeanne Hohbach of Lincoln, NE and Mark and Sarah Hohbach of Mulino, OR; one sister and brother-in-law, Jan and Marlen Chinn of Wayne NE. He was preceded in death by his father, Wilmer Hohbach; brother, Doug Hohbach; and daughter, Debbie Hohbach. In Loving Memory Of David Jon Hohbach Born: May 24, 1956 Passed Away: July 3, 2018 Age: 62 years, one month and 9 days FUNERAL SERVICE Friday, July 6, 2018 at 11:00 A.M. Andringa Funeral Home Sheldon Funeral Service OFFICIATING Pastor George Clausen MUSIC Keyboardist: Gayle Ten Haken Congregational Songs "Heaven is my Home" "In the Garden" "I Know That My Redeemer Lives" CASKET BEARERS Family INTERMENT Greenwood Cemetery, Matlock, Iowa Friends and family may stop at the house for a light lunch, following interment. ARRANGEMENTS BY Andringa Funeral Home Sheldon Funeral Service Larry R. Andringa, Funeral Director

To order memorial trees or send flowers to the family in memory of David Jon Hohbach, please visit our flower store.