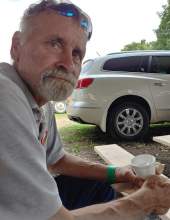 Delbert D. Dittman, age 66, of rural Hospers, Iowa who passed away on Saturday, November 21, 2020 at Sanford Sheldon Medical Center in Sheldon, Iowa. His Graveside Service will be at 1:00 P.M. on Tuesday, December 1, 2020 at the Prairie View Cemetery in Paullina, Iowa with Rev. Robin Thomas ~ Officiating.

Masks and social distancing are required at the Cemetery.

Arrangements are under the care of the Eldridge Family Funeral Home in Paulina.
Online condolences can be sent to eldridgefamilyfuneralhomes.com

DELBERT D. DITTMAN
Delbert D. Dittman the son of Leonard and Gisela (Henkel) Dittman was born June 4, 1954 in Orange City, Iowa. He received his education and graduated from Spalding High School in Granville, Iowa. He was united in marriage to Carol Schwarz at St. Joseph Catholic Church in Granville and to this union two children Ryan and Ann were born. The couple later divorced. On August 29, 2003 he was united in marriage to Valerie Johnson Sholly in Elk Point, South Dakota. Delbert made his home in Granville where he was a fireman and EMT on the Fire Department, and owned Dittman’s Lounge for a few years. Since 1997 the couple have lived on an acreage east of Hospers, Iowa. Previously, Delbert had also been employed at Packerland Packing Co. in Hospers, Den Hartog Industries in Hospers and before his retirement he worked at Siouxland Energy in Sioux Center. Delbert passed away on Saturday November 21, 2020 at the Sanford Medical Center in Sheldon after being stricken at his home reaching the age of 66 years, 5 months and 17 days.
He enjoyed his family and cherished his family time and he especially loved his grandchildren so much and was so proud of them all. Delbert also had a fondness for older International tractors, the Albert City Threshing Bee that he went to every year , his horses, chocolate marshmallow ice cream, his German Shephard, Louie and his Yorkie, Misha/ aka Super Boy.
Delbert is survived by his wife Valerie of rural Hospers; daughter Ann (Curtis) Krogman of Papillion Nebraska and son Ryan ( Mikyla) Dittman of Hospers, Iowa; three step-children Angela (J.T.) Sanow of Remsen, Iowa; Chris (Sarah) Sholly of Granville and Erin Sholly of Mendocino, California; eight grandchildren Zachary, Zander and Zayden Krogman, Zoe, Meraya, Bria, Kendrew and Draeysen Dittman; four step grandchildren Charity Sholly, Halle Kenney, Christian Sholly and Autumn Sanow; three step great grandchildren Desmond, Xander and Xavier, three sisters Doris Taylor of McAllen, Texas and Gisela Dittman of Brunsville, Iowa and Verna (Ron) Horsley of Eldridge, Iowa a sister-in-law Sue Dittman of Denver, Colorado, his step-father Charlie Hibbing of Cherokee, Iowa, two brother in laws Barry and Patchy Johnson, numerous nieces and nephews and many, many friends.
He was preceded in death by his parents, a brother Leonard Dittman, brother-in-law Richard Taylor, and a daughter Lisa in infancy, also his mother and father-in-law, Don and Yvonne Johnson of Paullina.
To order memorial trees or send flowers to the family in memory of Delbert David Dittman, please visit our flower store.