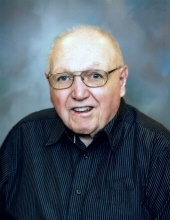 Visitation
with family present will be from 3 – 5 P.M.
on Saturday, November 16, 2019
at the Eldridge Family Funeral Home in Paullina.

Donald Edward Brown was born on February 24, 1934 at his parents’ home near Paullina, Iowa. His parents were Donald A. and Ruth (Nott) Brown. He was the older of two boys; he had a younger brother, Paul. He was baptized and confirmed in First Presbyterian Church in Paullina. Ed grew up on a farm outside of Paullina where he enjoyed going ice skating on the frozen ice over creeks and horseback riding. He attended the Paullina Public School and graduated in 1952 and went on to attend Monmouth College in Illinois up until enlisting in the Army. Ed served in the Korean War from 1953-1955. He met his future wife, Marva Lentz, who was a schoolteacher in Paullina. Ed and Marva were married on December 22, 1956 in Hartington, Nebraska.
Ed was very involved in farming his entire life. He started Brown and Assoc. a bin construction company in 1971. In 1977 Ed built a country elevator, where he bought, sold, dried and stored grains. His son, Todd joined the company after graduation. Along with farming, Ed had numerous hobbies.
He enjoyed golfing, fishing and bowling. Ed earned his private flying license and helped establish the Paullina airport. Ed also enjoyed traveling in addition to spending winters in Arizona. He has visited much of the Eastern Coast, Australia, New Zealand, Fiji, Hawaii, Canada and Mexico.
Ed passed away on Tuesday, November 12, 2019 at Prairie View Home in Sanborn reaching the age of 85 years, 8 months and 19 days.
Left to cherish his memory is his wife of 62 years, Marva; children, Sara (Chuck) Postma, Todd (Rhonda) Brown both of Paullina, Mark (Kris) Brown of Dakota Dunes, South Dakota; grandchildren, Andrew, Evan, Heath (Stephanie), Chad & Melissa; great grandchildren, Emerson, Greyson, Siena, Jayce and Tye; also other relatives and friends.
Ed was preceded in death by his parents and brother, Paul.