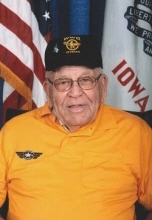 Visitation will be after 3 P.M. on Monday, November 14, 2016
with family present from 5 7 P.M. at the
Eldridge Family Funeral Home in Primghar.

Donald H. Wittrock
Don was born on July 18, 1921, the son of Hugo and Clara (Koch) Wittrock. He attended country school and graduated from Primghar High School in 1939. In 1943 he entered the U.S Army and was trained at Camp Edwards Massachusetts on a 90mm anti-aircraft artillery gun. He was in the European theatre from December 1943 to December 1945, guarding General Eisenhowers First Army Headquarters and participating in the Normandy invasion, liberation of Paris, Battle of the Bulge, and occupation of postwar Germany. On November 28, 1948, he married Arlene Wiese at the Zion United Church of Christ in Calumet, Iowa. He was an active member of the United Church of Primghar and served in many capacities including chairman of the building committee. He was a lifelong member of American Legion Post 36 and the Farm Bureau. He was a leader of the Center Farmers 4-H club and served on the OBrien County Fair Board for 28 years. For many years Don and Arlene were superintendents of the vegetable open class at the fair.

Don and Arlene farmed north of Primghar from 1949 to 1988 when they retired and moved to Primghar. Don loved to garden and gave much of his produce to family, friends, and the heifer project at church. He enjoyed woodworking and making barn quilts, painting over 120, many of which are found throughout OBrien County. Don passed away on Saturday, November 12, 2016 at Mercy Medical Center in Sioux City, Iowa reaching the age of 95 years, 3 months and 24 days.

Don was a loving husband and understanding father. His greatest moments were winning the 1956 Iowa Contour Plowing Championship and receiving his trophy from President Eisenhower, and after raising 4 boys, walking his daughter Sharon down the aisle at her wedding. He was a proud veteran and participated in the August 2010 Honor Flight to Washington with three other WWII veterans from Primghar. He loved his family unconditionally and enjoyed seeing his children and grandchildren succeed at their chosen careers.

He was preceded in death by his parents, brother Ervin, and daughter-in-law Jan Wittrock.
To order memorial trees or send flowers to the family in memory of Donald H. Wittrock, please visit our flower store.