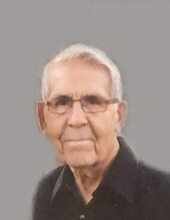 Donald Mastbergen
Sheldon, Iowa
Services for Donald Mastbergen, age 87, of Sheldon who passed away on Monday, December 14, 2020 at his residence. A public graveside service will be held at 2:00 P.M. on Saturday, December 19, 2020 at East Lawn Cemetery in Sheldon with military rights presented by McGlothlen-Cowie Post #145 of the Sheldon American Legion.
Masks must be worn at the cemetery and social distancing will be required at the cemetery.
Arrangements are under the care of the Andringa Funeral Home – Sheldon.

The graveside service will be live-streamed on: https://www.facebook.com/eldridgefamilyandvanderploegfuneralhomes

MUSIC
“It Is Well With My Soul”
“How Great Thou Art”
Sung by: Pastor Paul Van Maaren

Arrangements are under the care of the
Andringa Funeral Home – Sheldon.
Donald Leroy Mastbergen, age 87, of Sheldon passed away on Monday, December 14, 2020 at his home.
Don, the son of Arie and Carrie (Buysman) Mastbergen, was born in Archer, Iowa on January 18, 1933. Don was the youngest of 10 children. He attended Archer Elementary, Sheldon Christian School and graduated from Sheldon High School. From the time he was a youth, he helped his dad farm. Later, he became a Corporal in the Army while stationed in Korea from 1953-1955. He came back to Sheldon and began farming the home place which he later purchased. He was united in marriage April 28, 1962 to Idelle (Bothof) in the Little Brown Church in Nashua, Iowa. They had three daughters, Amy, Heidi, and Jill.
Don taught his daughters good work ethic by involving them in keeping his fields weed-free as he wanted all his fields to look great. In addition to farming, he raised feeder cattle. He taught himself to fix almost anything concerning farming and machinery.
Don was a member of the First Reformed Church of Sheldon, American Legion, and VFW. He served on the Board of Directors of the Farmers Elevator for 12 years and 6 of those years as Secretary.
Don and Idelle enjoyed square-dancing and RV-ing with friends. They spent many years going South in the winter and going to Okoboji in the summer. They enjoyed camping at Okoboji with the grandkids, including, boating, waterskiing, miniature golfing, and grilling. Don was waterskiing until the age of 76. Don’s hobbies included: hunting, motorcycling, gardening, reading, and having breakfast with the guys. He was skilled in woodworking making various bowls for his family while snow-birding in Arizona.
He is survived by his wife, Idelle Mastbergen and their daughters, Amy (Dean) Van Marel of Sheldon, IA, Heidi Mastbergen of Sioux Falls, SD and Jill McTaggart of Columbus, MS; four grandchildren, Jena Van Marel of Houston, TX, Michael McTaggart of San Diego, CA, Ryan Van Marel of Brookings, SD and Jasmine Greer of Manhattan, KS.
He was preceded in death by his parents, Arie and Carrie Mastbergen; a stillborn son Darin Lynn; five brothers, Lambert, John, Henry, Arie, and Charles; four sisters, Jeanette, Irene, Henrietta, and Carrie.
To order memorial trees or send flowers to the family in memory of Donald L. Mastbergen, please visit our flower store.