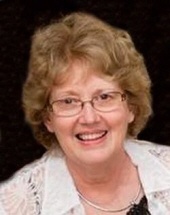 MUSIC
Breath of Heaven
It Is Well With My Soul
Sung by: Tricia Meendering & Wil George

CONGREGATIONAL HYMN
Jesus Is All The World To Me
Organist: Lois Gruis

There will also be visitation one hour prior to service
on Wednesday, March 8, 2017
at Trinity United Methodist Church in Albia, Iowa with

After todays graveside service relatives and friends are invited
to join the family at the Manhattan Family Steak House in Centerville, Iowa

Arrangements under the care of the
Vander Ploeg Funeral Home, Sheldon, Iowa.

DORIS H. LINDLEY
Doris Hillis Lindley, the daughter of Donald Show and Doris Elinor (Farnan) Hillis was born on June 8, 1946 in Wilmington, Delaware. She was raised in Chadds Ford, Pennsylvania and received her education from Media High School, graduating in 1964. She grew up on a campground of the Brandywine Summit Camp Meeting. After graduating, she attended Lindenwood University in St. Charles, Missouri for two and a half years. Doris was united in marriage to Marvin Lindley on August 15, 1965 in Chadds Ford, Pennsylvania. After their marriage, the couple made their home in St. Charles, where Marvin worked for McDonnel-Douglas Aircraft and Doris continued her education. In 1967, the couple relocated to Iowa to start a family. Doris became a major support of Marvins ministry while raising their family. In 1980, she graduated from William Penn University with a double major in Sociology and English Education. Doris was a substitute teacher for ten years and then entered ministry in 1996. During her ministry, she was the Methodist minister for Danbury, Galva/Silver Creek, Archer and Melvin parishes. Doris and Marvin moved to Sanborn, Iowa in 2013. Doris went to be with the Lord on Saturday, March 4, 2017 reaching the age of 70 years, 8 months and 26 days.
Doris was a member of the Iowa Conference of the United Methodist Church. She enjoyed crafting, gardening, quilting, antiquing, and reading. She was an avid traveler almost visiting all 50 states. She loved her grandchildren and spending time with her family. Doris was an authentic and honest woman who valued her friendships and was the best at being a good friend.
Left to cherish her memory is her husband of 51 years, Marvin of Sanborn; children, Debi and husband, Ron Wilson of St. Joseph, Missouri; Marla Lindley of Sheldon, Iowa and Rob Lindley of Chicago, Illinois; three grandchildren, Michael, Nicholas and Mariah Wiel; brothers, Daryll (Margaret) Hillis of Inglis, Florida and Dean Hillis of Portland, Oregon; brothers-in-law, Fred Lazell (Evelyn) Lindley of Bloomfield, Iowa; Keith (Joy) Lindley of Indianola, Iowa; Wayne (Barbara) Lindley of Oskaloosa, Iowa; sisters-in-law, Kay Hendrickson and Nancy Stokwisz both of Coralville, Iowa; also nieces, nephews other relatives and friends.
Doris was preceded in death by her parents and siblings, Donald, Dana and Debbie.

In Lieu of flowers memorials may be directed to where Marla resides:
Village Northwest Unlimited; Sheldon, Iowa.

Memories
You cant buy special memories
With silver or with gold.
Memories come to us without a price
As our years of life unfold.

Ive longed for many things in life,
Some with hidden thorns of pain,
And knowing what was best for me,
God sent both sunshine and the rain.

The hard times teach us to appreciate
The good times when they come along.
If all of life was fun and games,
How could we ever grow strong?

God in His infinite wisdom,
Has given me many good years,
He taught me to suffer with others
And to feel their sorrows and tears.

So, if we want precious memories
As our years of life unfold,
We must learn how to love one another
cause its worth more than silver or gold.
To order memorial trees or send flowers to the family in memory of Doris H. Lindley, please visit our flower store.