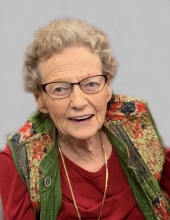 Dorothy A. Merrill
Sheldon, Iowa
Services for Dorothy A. Merrill, age 88, of Sheldon who passed away on Wednesday, November 11, 2020 at Sanford Sheldon Medical Center. A private family graveside service will be held at East Lawn Cemetery in Sheldon.
Arrangements are under the care of the Andringa Funeral Home – Sheldon.
Dorothy Ann Merrill was born on February 28, 1932 rural Sioux county, Iowa. She was the daughter of Cornelius and Jennie (Jacobsma) Houtsma. She attended and graduated from Hospers Christian School. She was united in marriage to Dale Merrill on August 25, 1950 in Sibley, Iowa. They lived in Boyden, Iowa for a few years and then moved to Sheldon. Dorothy loved people and greeting people with a smile through her work at National Food Store, Keen Korner, and Pamida. In her later years she was a part of the “toothbrush gang” that cleaned many houses in Sheldon. She logged many miles in the car with Dale to visit family, friends, the Black Hills and Arkansas or just when he wanted to go for a ride.
Dorothy was a member of Bethel Reformed Church in Sheldon and sang in the choir for many years. She enjoyed playing bridge, socializing with the cleaning ladies, spending time with her family and friends. Her life revolved around her family and friends.
Dorothy passed away on Wednesday, November 11, 2020 at Sanford Sheldon Medical Center reaching the age of 88 years, 8 months and 13 days.
Those left to cherish her memory are 3 sons and daughters-in-law, Randy and Pat Merrill of Sheldon, Iowa, Tim Sr. and Mary Merrill of Rochester, Minnesota, Neal B. and Jenette Merrill of Sioux Falls, South Dakota; daughter-in-law, Cyndi Olson; 10 grandchildren, Nate Merrill, Kate (Cody) Peterson, Melissa (Charlie) Nesdahl, Grant Merrill, Tim Jr. (Kerstin) Merrill, Adam (Annie) Merrill, Beau Merrill, Jacob (Kara) Merrill, Eric Merrill, John (Ashley) Merrill and 10 great grandchildren.
She was preceded in death by her husband, Dale; son, Bob Merrill; her parents; two sisters and three brothers.
To order memorial trees or send flowers to the family in memory of Dorothy A. Merrill, please visit our flower store.