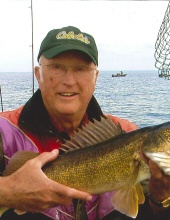 Dr. James G. Hanno, age 89, of Sanborn, Iowa and formerly of Sheldon, Iowa, passed away on Sunday, July 11, 2021 at the Accura Healthcare of Milford in Milford, Iowa. His Funeral Mass will be 1:00pm on Wednesday, July 14, 2021 at St. Cecelia’s Catholic Church in Sanborn with Fr. Tim Hogan ~ officiating.

Burial will be in the St. Patrick Catholic Cemetery in Sheldon, Iowa.

Visitation with the family present will be on Wednesday, July 14, 2021 from 12 noon until the time of service at St. Cecelia’s Catholic Church in Sanborn.

In Lieu of flowers Memorial may be Directed to: Iowa Youth Fishing League;
Village Northwest Unlimited or LOVE Inc.

MUSIC
“You Have Come To The Lake Shore”
sung by Andrea Limoges
CONGREGATIONAL HYMNS
“Christ Be Our Light” #587
“I am The Bread Of Life” #325
“Song of Farewell” #675
“Precious Lord Take My Hand” #663
Cantor: Andrea Limoges
Pianist: Jenny Castle

In Lieu of flowers, memorial may be directed to; Iowa Youth Fishing League, Village Northwest Unlimited or LOVE Inc.

Arrangements under the care of the:
Vander Ploeg Funeral Home ~ Sheldon, Iowa

DR. JAMES G. HANNO
Dr. James G. Hanno, the son of Earl and Cecelia (Dickman) Hanno, was born on September 30, 1931 in Remsen, Iowa. Jim grew up in the Remsen area where he attended St. Mary’s Catholic School and graduated in 1949. He attended Loras College graduating in 1953, then went on to graduate from the University of Iowa Dental College in Iowa City in 1957.
Jim was united in marriage to Margaret “Lois” Maguire on August 21, 1954, at Sacred Heart Catholic Church in Ayrshire, Iowa and to this union five children were born. After graduation, the couple moved to Sheldon, Iowa, where he opened his dental practice that served the Sheldon and surrounding area for the next 44 years until he retired in 2001. His wife, Lois, preceded him in death on January 2, 2010. Jim was united in marriage to Ruth J. Klever on April 14, 2012 at St. Patrick’s Catholic Church in Sheldon, Iowa and they made their home in Sanborn. Doc moved into the Accura Healthcare of Milford in Milford, Iowa where he passed away on Sunday, July 11, 2021 reaching the age of 89 years, 9 months and 11 days.
Jim was a member of St. Cecelia’s Catholic Church in Sanborn and a past member of St. Patrick’s Catholic Church in Sheldon. He had served on the Sheldon City Council from many years and was an Honorary-Life member of the Sheldon Knights of Columbus #1564. Doc enjoyed trapshooting, hunting pheasants and ducks, but his true love was fishing, and he supplied many fish to family and friends. His motto became “Power of the Bluegill.” Jim cherished his time with family and friends, coffee with his buddies, flipping quarters and a few pranks. His wonderful fish fries will be missed.
He is survived by his wife Ruth of Sanborn; his 5 children, Trese “Terri” and (Daniel) Castle of Greene, IA; James and (Emily) Hanno of Hospers, IA; Margaret “Marg” and (Kraig) Vos of Okoboji, IA; John and (Mary) Hanno of Sioux City, IA; Patricia “Pat” and (Joel) Limoges of Aitkin, MN; Ruth’s children, Lon & Donna Klever of Spearfish, SD; Lana & Warren Anderson of Milford, IA; LuAnn & Gary Schiphoff of Sibley, IA; 13 grandchildren, 18 great-grandchildren, a sister, Donna Fay Moran of Le Mars, IA and other relatives and friends.
Jim is preceded in death by his first wife, Margaret “Lois”; his parents and 2 sisters.
To order memorial trees or send flowers to the family in memory of Dr. James G. Hanno, please visit our flower store.