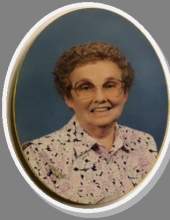 Eleanor R. Vellema
Elmira, Michigan
Eleanor R. Vellema, age 92, of Elmira, Michigan and formerly of Boyden, Iowa who passed away on Sunday, March 18, 2018 at the Aspen Ridge Retirement Living in Gaylord, Michigan. Her services will be 11:00 A.M. Tuesday, March 27, 2018 at the Vander Ploeg Funeral Home in Boyden, Iowa with Pastor Andrew Hilla~ officiating.
Burial will be in the Sheridan Township Cemetery in Boyden, Iowa.
Visitation will be from 9:00 A.M. until the time of service on Tuesday, March 27, 2018 at the Vander Ploeg, Funeral Home in Boyden, Iowa
Eleanor R. Vellema
Eleanor Ruth (Salie) Vellema was born the daughter of Mr. and Mrs. Cornelius Salie (Johanna Margo Dykema). She was born November 22, 1925, on the family farm north of Boyden, Iowa. She graduated from Boyden High School class of 1942. Eleanor worked as a telephone operator in Sioux Falls, South Dakota, before marrying Charles Vellema on February 21, 1949. Four children were born to that union. After raising her children, Eleanor was employed by the Missouri Division of Employment Security in Jefferson City, Missouri. When she retired in 1990, Eleanor made her home in Columbia, Missouri for almost twenty-five years.
She is survived by her children, Sally Purkett and husband, Jim of Farmington, Missouri; Polly Vance and her husband, Dennis of Springfield, Missouri; Colleen Wickham and her husband Mike of Gaylord, Michigan; William (Bill) Vellema and his wife Kris of Columbia, Missouri; one niece, Emily Leonard of Jefferson City, Missouri; six grand-children and five great grand-children.
Eleanor was preceded in death by her parents, one brother, Howard Salie and one sister, June Leonard.

For I am already being poured out as a drink offering, and the time of my departure is at hand. I have fought the good fight, I have finished the race, I have kept the faith. Finally, there is laid up for me the crown of righteousness, which the Lord, the righteous Judge, will give to me on that Day, and not to me only but also to all who have loved His appearing.
2nd Timothy 4:6-8
To order memorial trees or send flowers to the family in memory of Eleanor Ruth Vellema, please visit our flower store.