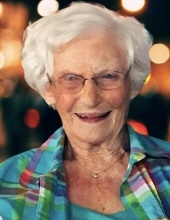 Services for Elizabeth “Betty” Burggraaff, age 100, of Sheldon who passed away on Friday, March 18, 2022, at Sibley Specialty Care.

A private family graveside service will be held at East Lawn Cemetery in Sheldon.

On December 25, 1941, Betty was united in marriage to Arie Burggraaff in Rock Valley, Iowa. Arie preceded Betty in death on March 18, 1991. Betty remained in Sheldon after his death and moved into Fieldcrest Assisted Living in 2017 and moved to Sibley Specialty Care in June of 2020. Betty passed away at Specialty Care on March 18, 2022, reaching the age of 100 years, 2 months, and 23 days.

Betty was a member of First Reformed Church in Sheldon. Betty enjoyed time at lake Okoboji were she and Arie spent the summers boating with family. She was very accomplished at needle point, she loved to read and enjoyed walking, gardening, and traveling. She and Arie enjoyed many winters in Delray Beach Florida and Islamorada in the Florida Keys.

Left to cherish Betty’s memory are her sons, John Burggraaff of Viborg, SD and Edward (Ramona) Burggraaff of Chicago, Il, grandchildren Barbara Burggraaff of Flagstaff, Az, Elizabeth Burggraaff Fuld (Betty’s namesake) of Chicago, IL, and Deborah Burggraaff of Cedarville, OH as well as her great grandson Jack Fuld. She will be remembered with so much love for the generous and kind person she was. She deeply touched all of our lives.

Betty was preceded in death by her parents, husband, Arie and her siblings Adrien Int’Veld, Marv Int’Veld and Yettie Vander Wilt.

To order memorial trees or send flowers to the family in memory of Elizabeth "Betty" Burggraaff, please visit our flower store.