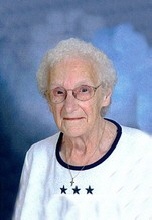 IN MEMORY OF
ELIZABETH M. MILLER

After the graveside service, relatives and friends are invited
to join the family in the fellowship hall.

Arrangements under the care of the
Vander Ploeg Funeral Home of Sheldon, Iowa

Elizabeth Mary Miller, the daughter of Andrew and Emma (Witt) Kippley, was born June 12, 1928 near Doon, Iowa and attended country school near Doon. She was united in marriage to Charles Miller on August 20, 1960 in Alvord, Iowa. The couple made their home in Sanborn for a year, they moved into Sheldon for 2 more years, before moving to Perkins Corner where they lived for 21 years. In 1985, they returned to Sheldon. Elizabeth had worked for Aalfs Manufacturing in Sheldon as an Inspector, retiring in 1990 when her husband took ill. Charles passed away on August 23, 1990. Elizabeth continued to live at home until she passed away on Wednesday, October 7, 2009 at Sanford Medical Center in Sioux Falls, South Dakota, reaching the age of 81 years, 3 months and 25 days
She was a member of the St. Patrick’s Catholic Church and the Ladies Guild of Sheldon. She loved playing Bingo and enjoyed word find puzzles, reading, game shows, her cat “Sam” and she especially enjoyed her grandchildren.
Elizabeth is survived by her 4 children, Joe Miller of Columbia, South Carolina; Tim and his wife, Carla Miller of Hospers, Iowa; Charlotte and her husband, Steven Boecker of Sioux Falls, South Dakota; Steve Miller and his girl friend, Christina McInnis of Boyden, Iowa; 13 grandchildren, Jeremy, Michael, Amanda, Kevin, Joshua, Heather, Traci, Robert, Emily, Michael, Camron, Breanne and Dakota; 6 great-grandchildren, Ayden, Blake, Andrew, Jaccob, Erika and Lucian; also nieces, nephews and other relatives and many friends.
She was preceded in death by her husband, an infant daughter, her parents, two brothers and a sister.
To order memorial trees or send flowers to the family in memory of Elizabeth M. Miller, please visit our flower store.