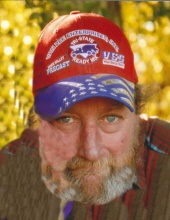 Andringa Funeral Home of Sheldon in charge of arrangements

ELLTEN S. JEDERBERG
Ellten Shawn Jederberg, the son of Edward and Sandra (Bowen) Jederberg was born February 2, 1962 in Luverne, Minnesota. He moved with his family to Sheldon where he received his education and graduated from Sheldon High School in 1980. After high school he worked for various construction companies. On June 27, 2000, he was united in marriage to Shelley Nilles in Primghar, Iowa. The couple made their home in rural Granville, Iowa. The last several years Ellten worked his own construction business until ill health forced his retirement. He passed away at his home in rural Granville on Monday, June 20, 2022 reaching the age of 60 years, four months and eighteen days.
He enjoyed spending time with his family especially his grandchildren, car racing and working on cars. Getting ready for the next race was Ellten’s favorite pastime and he loved all things racing. He enjoyed the figure 8 racing in Primghar, Rock Rapids and Worthington. His two dogs were his buddies around the acreage at home.
Those left to cherish his memory are his wife, Shelley Jederberg of rural, Granville, Iowa; his children, Tanya Jederberg in Minnesota; David McHenry and Daniel McHenry both in Sioux Falls, South Dakota; Carrie (Eric) Pohlen of Hospers, Iowa and Christopher (Crystal) Permann of Arlington, Iowa; 16 Grandchildren; his mother, Sandra Jederberg of Sheldon, Iowa; a brother, Scott Jederberg of Spencer, Iowa and a sister, Gina (Kevin) Kruger of Sibley, Iowa also aunts, uncles nieces, nephews, other relatives and many friends that all loved him.
He was preceded in death by a son, Joshua Jederberg and his father, Edward Jederberg.

To order memorial trees or send flowers to the family in memory of Ellten Jederberg, please visit our flower store.