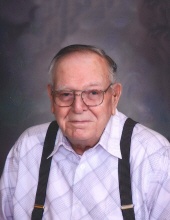 IN LOVING ME MORY OF
ELMER L. VAN KEKERIX

After today’s service, relatives and friends are invited
to join the family in the fellowship hall of the
Church of the Brethren.

Elmer Van Kekerix, the son of Sam and Martha (Sneller) Van Kekerix was born on the family farm north of Sheldon on January 29, 1921. He attended country school until the 8th grade. He married Bernice Sietsma in 1942 and she preceded Elmer in death in 1949 due to Hodgkin’s Lymphoma. Elmer enlisted into the United States Army in November of 1942 and was honorably discharged in January of 1946. He served in the European African Theater and also served in Austria. On September 14, 1951 he was united in marriage to Helen Schreuder in Rock Valley, Iowa. To this union one daughter, Mary was born. After their marriage they moved to the family farm north of Sheldon where they farmed for over 40 years. He retired in 1987 where they then bought their summer house at Pequot Lakes, Minnesota. They spent half of their retired years in Sheldon and at the lake for 22 years. Elmer and Helen moved into Prairie View Home in Sanborn on August 15, 2011. Elmer passed away on Wednesday, May 23, 2018 at Prairie View Home in Sanborn reaching the age of 97 years, 3 months and 24 days.
Elmer was a member of the Church of the Brethren. He enjoyed fishing and chasing squirrels from the bird feeders while at the lake. A special thanks is extended from Mary on to the Prairie View family for the care over the years.
Left to cherish Elmer’s memory is his wife of 66 years, Helen of Sanborn; daughter Mary Hall and husband Chris Anderson of Little Falls, Minnesota; two grandchildren, Jason and girlfriend Cynthia of Brainerd, Minnesota and Tarah and her husband Jason Dworshak of Rogers, Minnesota; four great grandchildren, Shelby and Ryan Hall of Sartell, Minnesota and Samuel and Hudson Dworshak of Rogers, Minnesota; brothers and sisters-in-law, Thelmer Jansma, Suzanne Van Kekerix, William and Alma Landegent, Clarence and Janet Schreuder and Allene Schreuder; also other relatives and friends.
Elmer was preceded in death by his parents; wife, Bernice; son-in-law, Jeff Hall; three brothers, Raymond and Alice Van Kekerix, Weldon and Mildred Van Kekerix, Howard Van Kekerix; sister, Martha Jansma; brother-in-law, Albert Schreuder and parents-in-law, Cornelius and Suzanne Schreuder.
To order memorial trees or send flowers to the family in memory of Elmer Van Kekerix, please visit our flower store.