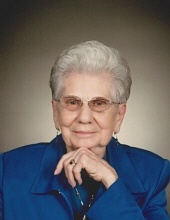 Eloise Helen Kuiper the daughter of Joseph “Joe” and Margaret (Tremmel) Huss was born February 11, 1924 in Osceola County near Sibley, Iowa. She received her education at St Joseph Catholic school in Ashton and graduated with the class of 1942. She furthered her education at Mankato Commercial College in Mankato, Minnesota and traveled back and forth in a 1930 Model A her dad had bought for her. In 1947 she was united in marriage to Ted Kuiper at St Mary Catholic Church in Ashton and to this union son Jerry and daughter Jacalyn “Jacci” were born. Eloise made her home in Ashton where she worked as a bookkeeper for multiple area business before being employed by the United States Postal Service working in Ashton and Maurice where she was officer in charge and later in Sheldon. In her retirement she continued to make her home in Ashton until moving to Sheldon Sanford Senior Care in 2018. She passed away at Senior Care on Thursday January 21, 2021 reaching the age of 96 years 11 months and 10 days.
She was a member of the St. Mary Catholic Church. She raised her two children and was always proud of their accomplishments, and later her grandchildren and great grandchildren who called her “Grammy” were important in her life. Also part of the family were her two cats Muffi and Sami who she dearly loved. Eloise enjoyed sports being a Sheldon Orab sports fan especially while her grandchildren played and a loyal Kansas City Royals baseball fan attending two World Series games in 1985 and in 2015. She also enjoyed bowling and golfing. The family farm was always important to her from her time growing up and helping cook for the threshing crew to overseeing the land as an adult.
Eloise is survived by her two children son Jerry Kuiper of Sheldon, Iowa and daughter Jacalyn “Jacci” and her husband Richard Harvey of Des Moines, Iowa; two grandchildren Tom (Jeanne) Kuiper of Sheldon and Nick Kuiper D.O. of Des Moines; six great grandchildren Spencer, Dallas, Charlotte, Khloe, Quinn and Boston; other special people in her life were longtime companion Harold “Fuzz” Honkomp, Judy Kuiper, Missy Kuiper and her two children Adam and Lindsey; her fur friends Tucker, Molly and Deuce.
She was preceded in death by her grandson Jeremy Kuiper in 2010, parents Joe and Margaret, brother Cecil and his wife Eva Huss and nephew Richard Huss.
To order memorial trees or send flowers to the family in memory of Eloise Helen Kuiper, please visit our flower store.