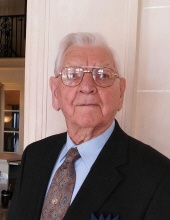 The service will be live-streamed on the Eldridge Family Funeral Home Facebook page and will also be uploaded on the website after the service.

Arrangements are under the care of the Vander Ploeg Funeral Home in Sheldon.
Online condolences may be sent to www.vanderploegfunerals.com

Ervan Paul Jahn was born in Kingsley, Iowa May 29, 1922. He passed away peacefully in his sleep October 16, 2020 at the age of 98 years and 141 days at the Sanford Sheldon Senior Care in Sheldon, Iowa.
He was the youngest child of Albert and Martha (Albers) Jahn sharing his birthday with a twin sister (Erma). Ervan grew up on the family farm near Kingsley, Iowa and attended country school at Elkhorn Township. After he finished his education he farmed with his father and brother (Carl). At the onset of WWII Ervan joined the Merchant Marines and served the duration of the war.
On August 12, 1945 he was united in marriage to the love of his life, Lorraine Lillian Hohbach at St.John’s Lutheran Church in Germantown, Iowa. He and Lorraine farmed in the Germantown and Sheldon area until 1956 when they moved to Sheldon. Ervan worked at the CO-OP, had a small contractor operation and was employed with the USPS where he retired. They stayed in Sheldon until 1988 when they moved to Spirit Lake, Iowa in the summer and McAllen, Texas in the winter. Ervan enjoyed fishing, bowling, and carpentry.
Lorraine preceded him in death passing away August 27, 2003. He is survived by two sons, Larry of Garnett, KS and Alan (Mary Jo) of Cedar Rapids, IA and 3 daughters Diane of Omaha, NE, Patricia of Sioux City, IA, and Vicki of Hummelstown, PA and special friends Jackie Waganaar of Sheldon, IA and Diana Jahn of Garnett, KS and many loving grandchildren, great-grandchildren and great-great-grandchildren.
To order memorial trees or send flowers to the family in memory of Ervan P. Jahn, please visit our flower store.