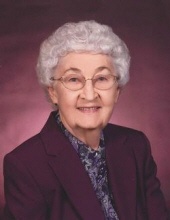 After today’s service relatives and friend are invited to join
the family in the fellowship hall of the church.

Esther Evelyn Ver Meer, the daughter of Hubert and Lena (Verrips) Kleyne, was born January 19, 1922 on the family farm near Boyden, Iowa. She was a lifelong member of the First Reformed Church of Boyden. Esther received her education in country school and later graduated from Boyden High School in 1940. After high school she worked at the telephone office in Sheldon. On June 18, 1946, she was united in marriage to Frank Ver Meer at the First Reformed Church in Boyden, Iowa. After their marriage the couple settled on the Ver Meer family farm northeast of Boyden. She enjoyed farm life and raising her children. She also enjoyed sewing for the family and playing games, especially Wahoo.

The couple retired to an acreage near their family farm. They enjoyed many years planting flowers, trees and shrubs. Weiner roasts with the family were a favorite pastime. Frank preceded her in death on December 10, 2009. Esther remained on the acreage until moving to the Christian Retirement Home in Sheldon in 2011 and to the Sanford Senior Care Center in September of 2017. She passed away on Monday, November 27, 2017 at the Sanford Senior Care Center reaching the age of 95 years, 10 months and 8 days.