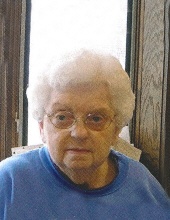 The family requests that everyone observes the social distancing guidelines and
that Masks are Preferred during the visitation and the service at the church.

Arrangements are under the care of the Vander Ploeg Funeral Home in Boyden.
Online condolences may be sent to www.vanderploegfunerals.com

CONGREGATIONAL HYMNS
“What A Friend We Have In Jesus”
“In The Garden”
“Victory In Jesus”
Organist: Ruth Heitritter

Memorials may be directed to
St. John Lutheran Church ~ Boyden,
or to Honor Flight

Arrangements under the care of the
Vander Ploeg Funeral Home; Boyden, Iowa
FENNA “TOOTS” WINTER
Fenna “Toots” Keizer Winter was born to Joe and Jennie (Hommes) Keizer on November 26, 1926, on a farm near Hull, Iowa. She was the only girl in a family of 5, with her brothers giving her the nickname of Toots. She received her education in a rural county school. Toots was united in marriage to Fritz Winter on February 24, 1965, at her parents’ home in Doon, Iowa with the reception taking place at the First Reformed Church in Doon, where she was a member. Toots became a farmer’s wife, a roll she took seriously working alongside of Fritz, they lived their married life on the farm that Fritz owned and operated. Following their marriage, she became a member of St. John Lutheran Church near Boyden, Iowa. Fritz preceded her in death on April 18, 1991, Toots remained on the farm until 1998, when she moved into Boyden. Following hip surgery in 2007, Toots became a resident at the Franken Manor in Sioux Center, Iowa and when needing more assistance, a move to a nursing home in Sioux Center was made. In June of 2012, it was decided she would be happier at Whispering Heights in Rock Valley where her brother, Bill was also a resident. Sunday afternoons were spent either in her room or Bill’s room with the room overflowing with visitors! A lot of reminiscing took place during those visits. Toots passed away at the Whispering Heights Nursing Home on Thursday, September 17, 2020 reaching the age of 93 years, 9 months and 22 days.
Toots was a member of St. John Lutheran Church rural Boyden. Toots was the name her nieces and nephews always used for her. I think I can say that most of us did not realize that she had another name until we were older. She had shared with her family that after she and Fritz were married, she always knew which side of the family was calling. The Keizer side would start the phone conversation with “Hello, Toots”; and the Winter side would start with “Hello, Fenna”.
Fenna is survived by her brother, Jim Keizer of Doon, IA; her sisters-in-law, Jen Keizer of Sheldon, IA and Carol Winter of Boyden, IA; and a host of nieces and nephews on both the Keizer and Winter side of the family.
She was preceded in death by her husband, Fritz; her parents, 3 brothers, Dick (Theo) Keizer; John J. Keizer; William (Grace) Keizer; a sister-in-law, Pat Keizer. She was also preceded in death by Fritz’s parents, Wilhelm H. and Dorathea (Bahlke) Winter; his 4 brothers, Albert H. Winter; Louis (Theora) Winter; Arnold Winter and Ernest Winter; and 2 sisters, Martha Winter and Betty McKnight.
To order memorial trees or send flowers to the family in memory of Fenna "Toots" Winter, please visit our flower store.