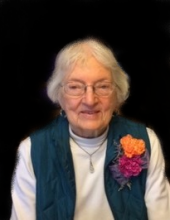 Services for Fern A. Rosenboom, age 100, of Primghar who passed away on Thursday, June 18, 2020 at Prairie View Home in Sanborn. Her graveside service will be held at 11:00 A.M. on Saturday, June 27, 2020 at East Lawn Cemetery in Sheldon, Iowa.
There will be no visitation.
Arrangements are under the care of the Eldridge Family Funeral Home in Primghar.

IN LOVING MEMORY OF
FERN A. ROSENBOOM

After the graveside service relatives and friends are invited to join the family at the
Pizza Ranch in Sheldon.

Arrangements in care of the
Eldridge Family Funeral Home; Primghar, Iowa
FERN A. ROSENBOOM
Fern Adel Weaver Rosenboom the daughter of Bernard and Esther (Paulson) Weaver was born March 25, 1920 in Sheldon, Iowa. She graduated from Sheldon Public School and Sheldon Junior College in Sheldon, Iowa in 1940. Fern worked as a seamstress in the drapery department of Starret Brothers Department Store in Sheldon. On October 27, 1945, she was united in marriage to John H. Rosenboom in Sheldon, Iowa. After their marriage the couple lived in various communities before settling in Primghar, Iowa. They wintered in Alamo, Texas for 25 years. John preceded her in death on March 6, 2000 in Primghar, Iowa. She remained in Primghar where she was very active in Dinner Date and for many years helped wash the dishes. She moved to the Prairie View Retirement Home Villa; in Sanborn, Iowa on January 10, 2020 and was able to celebrate her 100th birthday with a party.
She was an active member of the United Church of Primghar. United Church Women and Kings Daughters. Fern really enjoyed her family spending time with her children, grandchildren and great grandchildren. She stayed active with exercise class at the Primghar Community Building.
Fern is survived by her two children, James and his wife, Rhonda Rosenboom and Myrna and her husband, Rodney Heimensen all of Primghar, Iowa; three grandchildren, Corey (Heather) Heimensen of Rock Rapids, Iowa; Nicholas (Kelley) Rosenboom of Fruitland, Iowa and Ann Marie (Lucas) Rich Lakewood, Colorado; six great grandchildren, Zed, Grace and Hayden Heimensen; Emma and Tyler Rosenboom and Sloan Rich; a brother-in-law and his wife, William and Leona Rosenboom of Sheldon, Iowa also other relatives and friends.
She was preceded in death by her husband, parents; a grandson, Mark Allen Rosenboom; a sister, Alice and her husband, Willard Bell.
To order memorial trees or send flowers to the family in memory of Fern A. Rosenboom, please visit our flower store.