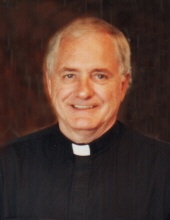 MUSIC
Be Thou My Vision
Responsorial Psalm “Psalm 23”
“The King of Love, My Shepherd Is”
“Alleluia, Sing to Jesus”
“Song of Farewell”
“In Paradisum”
Cantor: Priests of the Diocese
Organist: Matthew Geerlings

Memorials may be directed to Holy Spirit Retirement Home
and/or the Cathedral of the Epiphany,
1821 Jackson St., Sioux City, IA 51105

FR. HARRY D. McALPINE
Reverend Harry Duane McAlpine the son of William and Henrietta (Overman) McAlpine was born on April 3, 1935 in Sheldon, IA. He attended school in Sheldon, graduating from Sheldon High School in 1953. He graduated from the University of Iowa in Iowa City, IA in 1957. He attended the University of CO and the University of St. Paul Seminary in St. Paul, MN, where he received his Master’s in Theology in 1987. Fr. McAlpine was Ordained into the Priesthood on May 30, 1987 at St. Patrick Catholic Church in Sheldon, Iowa. He went on to serve as Parochial Vicar at St. Cecelia Parish in Algona, IA from 1987-1989; Pastor at St. Joseph Parish in Dedham, IA from 1989-1992; Sacred Heart Parish in Sutherland and St. Anthony in Primghar, IA from 1992-1995; Sacred Heart Parish in Ft. Dodge, IA from 1995-1999; Our Lady of Good Counsel Parish in Fonda/Varina, IA from 2000-2002 and St. John Parish in Onawa and St. Bernard’s in Blencoe, IA from 2002 until his retirement on July 12, 2005.
He was a member of the Spencer KofC and the Msgr. McCoy 4th Degree Assembly both of Spencer, IA. Fr. enjoyed golfing, reading, coin collecting and playing cards. He enjoyed vacations and semi-retirement in Royal Palm Beach Florida area. He was commended by parishioners on his explanation of scripture.
Fr. is survived by his siblings, Robert McAlpine of Rochester, MN; Joan McCarty of Le Mars, IA and Sandra (Dwight) Lindgren of Elk River, MN; several nieces, nephews and other relatives and friends.
Fr. was preceded in death by his parents, William and Henrietta McAlpine and seven brothers, Walter, Alvin, Adrian, William, Michael, Harold and Eugene, one sister, Katherine Frye and seven sisters-in-law and two brothers-in-law.
To order memorial trees or send flowers to the family in memory of Fr. Harry D. McAlpine, please visit our flower store.