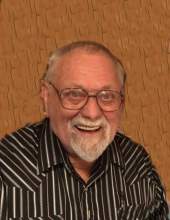 Burial will be the St. Joseph Catholic Cemetery in Granville.

Visitation will be Monday, July 12, 2021 from 10:00 A.M. until service time at St. Joseph Catholic Church in Granville.
Arrangements are under the care of the Eldridge Family Funeral Home in Paullina.

Online condolences can be sent to eldridgefamilyfuneralhomes.com

MUSIC
“The King of Love My Shepherd Is”
“Prayer of St. Francis
“Alleluia Sing To Jesus”
“When The Saints Go Marching In”
Organist: Dennis Ormond

FREDERICK G. HUNT
Freddie was born on April 28, 1933, in Granville, Iowa, to Anthony and Helen (Thorman) Hunt. In his early years he attended country school, and later graduated from St. Joseph's High School in Granville, in 1951. During those years he kept busy with baseball, basketball, and helping on the farm. He served in the US Army 1953-1955, where he was stationed in Germany.
On August 20, 1956, he married Rose Mary (Skip) Schierholt in Ashton, Iowa. Freddie and Skip farmed near Ocheyedan, Iowa for 1 year, before buying a farm near Granville, where they lived until moving to Peterson in 1982. He continued to help his son on the farm, while driving bus for Lynn Grove School, serving as the Clay County Weed Commissioner, and was President of the State Weed Commission. During his early years of marriage, he played town baseball for the Paullina Lakers, later managing the team. After retirement, Freddie and Skip enjoyed wintering in Arizona.
Freddie enjoyed following his children, grandchildren, and great-grandchildren in their various activities. He was a fan of the N.Y. Yankees. He also loved to follow his sons and grandchildren at the Figure 8 Races in Primghar.
He is survived by his wife, 5 children: Brenda Hunt and Donny Guthrie of Greer, AZ, Debbie and Donnie Skrynski of Ballston Spa, N.Y., Darrell of Granville and his fiancé, Brenda Langland of Paullina, Joe and Tami of Granville, Patty and Kirk Hatting of LeMars; a daughter-in-law, Mary Hunt of Alton; 20 grandchildren; 14 great-grandchildren; brothers, Danny and Faye Hunt of Granville, and Sam and Karen Hunt of Marengo, IA; a sister, Mary Roethler of Marcus; sisters-in-law, Jean and Frank Kennedy of Arnolds Park, Margaret Lamfers of Ashton, Barb and Fred Bern of Jackson, MN; and many nieces and nephews.
He was preceded in death by his parents; 2 brothers, George and David (in infancy); brothers-in-law, Mark Roethler, Monte Lamfers, Roman Schierholt, Donald Schierholt; a son, Jim (J.D.); and a grandson, Chester Skrynski.
The family has requested that memorials be directed to SYC (Special Youth Challenge) of Iowa PO Box 386 Sioux Rapids, Iowa 50585, which is a Christian-based hunt for disabled youth and veterans.
To order memorial trees or send flowers to the family in memory of Frederick George Hunt, please visit our flower store.