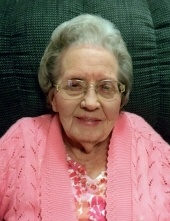 IN LOVING MEMORY OF
FRIEDA SMIT


FRIEDA SMIT
Frieda Smit the daughter of Neal and Jennie (Jacobsma) Houtsma was born April 22, 1918 at Boyden, Iowa. She received her education in Boyden schools. On December 19, 1935 she was united in marriage to Raymond Smit in Boyden, Iowa. After their marriage the couple settled in Boyden and raised their two daughters Janice and Sherry. Ray and Frieda operated Smit & Son Packing Company. Frieda assisted Ray in doing the wash for the company and taking in some of the workers into their home. Ray always asked if there was pie for supper and being a wonderful cook, Frieda had pie for supper. The couple retired in 1974 and remained in Boyden and spent many winters in Yuma, Arizona. Ray passed away on May 18, 1993 in Sioux City, Iowa. Frieda remained in the family home in Boyden with the family’s bull on the front lawn until her health failed and she moved to Fieldcrest Assisted Living in Sheldon. She later moved to the Hawkeye Care Center in Spirit Lake, Iowa where she passed away on Tuesday October 2, 2018 reaching the age of 100 years five months and ten days.
She was a member of the First Reformed Church in Boyden and had taught catechism. Music was a big part of Frieda’s life. She sang at many funerals, with the Senior Saints and the Siouxland Woman’s chorus which appeared at the New York World’s Fair on stage with Eleanor Roosevelt. She enjoyed cooking and baking, spending time with her family and was known to be a feisty woman.
Frieda is survived by her daughter Janice Sneller of Boyden, Iowa; four grandchildren Ray Stephens and friend Stacey Manitz of Spirit Lake, Iowa; Lorene and her husband Dr. Steve Parsons of Bloomington, Illinois; Rhonda and her husband Dr. Wayne Kompelien of Lynchburg, Virginia, and Lynn Rae and her husband Wayne Walker of Lawrence, Kansas, also ten great grandchildren; eight great-great grandchildren; one sister Dorothy and her husband Dale Merrill of Sheldon, Iowa, also other relatives and friends.
She was preceded in death by her husband, a daughter Sherry Stephens, son-in-law Scott Sneller, three brothers Hank, Cyril and Jim Houtsma and one sister Mabel Hulst.
To order memorial trees or send flowers to the family in memory of Frieda Smit, please visit our flower store.