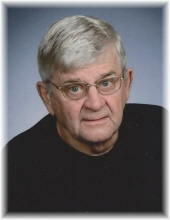 Gary Hoekstra, age 75, of Sheldon, Iowa, passed away on Wednesday, February 28, 2018 in Sioux City, Iowa. Visitation will be Saturday, March 3, 2018 from 1:00 to 3:00 P.M. with the family present at the Andringa Funeral Home Sheldon Funeral Service in Sheldon. There will be no memorial service. Burial of cremains will be at a later date. Gary Reed Hoekstra was born on April 28, 1942 in Sheldon, Iowa. He was the son of Louis and Alberdina (Toering) Hoekstra. He was a baptized member of the Christian Reformed Church in Sheldon. Gary lived his youth in Sheldon where he attended Sheldon Christian Grade School and Sheldon High School, where he graduated. He learned the trade of bricklaying from his father. He was united in marriage to Ruby Fessler of Larrabee, Iowa on July 13, 1963 in Worthington, Minnesota. They lived in Sheldon where Gary worked as a bricklayer for De Stigter Construction and Andringa Construction. Gary started his own bricklaying business and later Ken Seivert became a partner. He retired in 2011. Gary enjoyed watching his granddaughters play sports and seeing them grow up. He liked to play cards, Cribbage, Solitaire and Rummy, and travel with Ruby to visit family. Gary passed away on Wednesday, February 28, 2018 in Sioux City, Iowa. Those left to cherish his memories are his wife of 54 years, Ruby Hoekstra of Sheldon, IA; his son and daughter-in-law, Mark and Andrea Hoekstra and their daughters, Madison and Molly of Des Moines, IA; one brother, Lorin Hoekstra of Murry, UT; three sisters, Donna Vigileos of Mesa, AZ, Audrey (Ken) Arnold of Gering, NE, Glenna Wilkinson of Clear Water, MN. He was preceded in death by his parents; three brothers, Jim Hoekstra, Vernon Hoekstra and Harold Hoekstra.

To order memorial trees or send flowers to the family in memory of Gary Hoekstra, please visit our flower store.