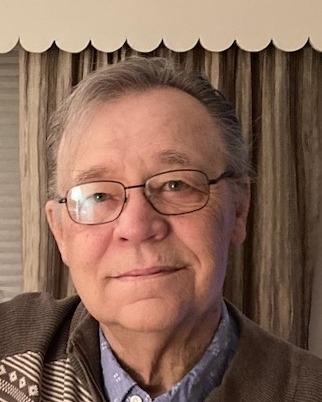 Gary Klinker’s Celebration of Life will be held at 11:00 A.M. on Thursday, January 12, 2023,2023 at Eldridge Family Funeral Home, Primghar, IA with Pastor Mike Cooper ~ officiating.  The family will be present prior to the service. Burial will follow at West Prairie View Cemetery, Paullina.  Memorials may kindly be given to Windsor United Methodist Church, 6222 University Ave, Des Moines, IA  50311.

Gary Lee Klinker passed from this life December 30, 2022, in Des Moines, IA.  He was born August 9, 1946, in Primghar, IA to Donna Elaine Anderson Klinker and William Peter Klinker.  Gary’s father was a schoolteacher and coach and his mother, a homemaker.  As a child Gary lived in Iowa communities of Storm Lake, Perry, Gruver, Ledyard and Newell, where he graduated high school in 1964.  One of his first jobs was delivering milk and cream at age 15 in a 1950 panel delivery truck to Newell residents.

Gary attended Buena Vista College and Ft Dodge Community College.  In September 1966 he enlisted in the US Army Reserve and served 6 years as Staff Sargent. Following this he enlisted in the National Guard in Minnesota and in Iowa.  He retired in January 1993 after 24 total years of service as a cook.

Following Gary’s marriage to Helen Elaine Wackher in 1967 two children were born:  Garrett Andrew, December 17, 1968, and Gretchen Lynn, March 12, 1971.  While the family lived in Albert Lea, MN Gary worked for Concrete Minnesota, and completed drafting classes at Riverland College to become a technical writer at Universal Cooperatives. He was active in the American Legion, Jaycees, and Community Theatre.  Gary moved to Des Moines in 1985 following a divorce where he worked for Ryko Manufacturing as publications supervisor from 1985–1996.  He wrote manuals for John Deere cotton pickers in Ankeny from 1996-1999.  In later years he served as a customer service associate for Citi Group and for Wellmark Blue Cross Blue Shield from which he retired in August 2010.  He was a member of Windsor United Methodist Church where he served on the Board of Trustees.

Gary had a big heart, a sense of humor, was a good neighbor and helped others when he could.  His passions were the Lake Okoboji area, old movies, and doing painting and yard work.  His handiwork could be seen in many homes and yards.  He enjoyed dancing, boating, camping, reading and woodworking.  Road trips helped fulfill his sense of curiosity and adventure.

To order memorial trees or send flowers to the family in memory of Gary L. Klinker, please visit our flower store.