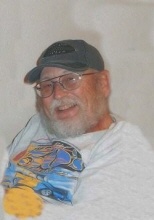 IN LOVING MEMORY OF
GEORGE A. SCHNEIDER

After the graveside service, relatives and friends are invited to
join the family in the fellowship hall of the church

GEORGE A. SCHNEIDER
George Arthur Schneider, the son of Glen Marvin and Josephine M. (Eich) Schneider was born on February 4, 1947 in Sheldon, IA. He received his early education in Archer and graduated from Sheldon High School. He was united in marriage to Evonne I. Strenge on August 7, 1970 at the American Lutheran Church in Melvin, IA after their marriage the couple made their home in Archer, IA, before moving into Sheldon. George worked for Neal Chase Lumber in Sheldon for 43 years, before he retired in 2013. George passed away on September 7, 2017 at his home in Sheldon, reaching the age of 70 years, 7 months and 3 days.
George was a member of St. Paul Lutheran Church, the Eagles Club and the Moonlite Crewzers Car Club all in Sheldon. He enjoyed hunting, fishing, dancing, working on old cars, riding his motorcycle and playing cards.
Left to cherish Georges memory is his wife of 47 years, Evonne of Sheldon; and their children, Vanessa Odens of Sibley, IA; Danaca and Chris Barton of Newton, IA; Kendra and Brent Kamstra of Sheldon, IA and Bodie Osborn-Schneider of Minot, ND; grandchildren, Bretton, Gracie, Landon; Harper, Temple, Frances; Kayley, Parker and Georgia; a brother, Warren and his wife JoAnn Hulst of Chula Vista, CA, other relatives and friends.
George was preceded in death by his parents.

God saw he was getting tired,

And a cure was not to be.

So He put His arms around him,

And whispered, Come with Me.

With tearful eyes, we watched him suffer,

And slowly fade away.

Although we loved him dearly,

We could not make him stay.

Working hands were put to rest.

God broke our hearts to prove to us,

He only takes the best.

For God so loved the world, that he gave his only begotten Son,
that whosoever believeth in him should not perish,
but have everlasting life.

John 3:16
To order memorial trees or send flowers to the family in memory of George Arthur Schneider, please visit our flower store.