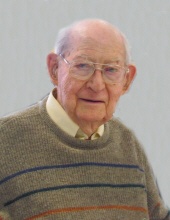 MUSIC
“I Can Only Imagine”
“On Eagles Wings”
Sung by: Tricia Meendering
CONGREGATIONAL HYMN
“It Is Well With My Soul”
Organist: Barb Burns

George T. Sterler was born March 12, 1921 in Ashton, IA, the son of Henry and Helen (Miller) Sterler. He graduated as valedictorian from Ashton High School in 1938. He enlisted in the U.S. Army Air Corps in 1942 and went to flight school training to become a B-17 bomber pilot. He flew with the 338th Squadron of the 96th Bomb group over France and Germany. On his 29th mission, his aircraft was rammed by a German fighter plane causing a mid-air explosion. He parachuted out and he and his tail gunner were the only survivors. Upon capture, he was held in three different German POW camps. As Captain, he earned the Distinguished Flying Cross, Air Medal with Four Oak Leaf Clusters, Purple Heart, POW Medal, European Ribbon and was a member of the Irvin Air Chute Caterpillar Club (successfully using a parachute to bail out of a disabled aircraft).
After returning to the states, he married Norma Kimmel on Nov. 22, 1945 at the Church of the Brethren. He worked at the Council Oaks grocery store, Montgomery Ward, and spent 36 years as a rural mail carrier, all in Sheldon. He was a beloved mail carrier who helped patrons out in all weather conditions. His wife preceded him in death on April 27, 1995 in Sheldon. After Norma died, George continued living at home until 2005, when he entered the Christian Retirement Home, in 2018 he went into Fieldcrest where he had been presently living. He passed away on Saturday August 17, 2019 at the Community Memorial Health Center in Hartley reaching the age of 98 years 5 months and 5 days.
After retiring he did volunteer work and was on various boards. He and his wife Norma were active members at the Sheldon United Methodist Church and were Stephens Ministers. George was a member of American Legion Post 145, VFW Post 7354, Prairie Queen Kiwanis, Ex POWs, Rural Letter Mail Carrier Association, Avenue of Flags and was also on the board of directors of BEECIN Hospice. A highlight in 1991 was when he and Norma were parade marshals for the Sheldon Celebration Day parade.
He is survived by a son, Lowell (Susan) Sterler of Scottsdale, AZ; a daughter, Rita Sterler of Iowa City, IA; a sister, Dorothy (Ray) Brink of Sheldon, IA; a sister-in-law, Donna Sterler of Sibley, IA; several nieces, nephews and many friends.
George was preceded in death by his wife, Norma; parents, Henry and Helen Sterler, brother, Merrill Sterler of Sibley and brothers-in-law, Loren (Ruby) Kimmel, Dayton (Delores) Kimmel and Richard (Clare) Kimmel.


“Blessed Be His Memory”

God is our refuge and strength,
an ever-present help in trouble.
Therefore we will not fear,
though the earth give way
and the mountains fall
into the heart of the sea,
though its waters roar and foam
and the mountains quake
with their surging.
There is a river whose streams make
glad the city of God,
the holy place where the Most High dwells.
God is within her, she will not fall;
God will help her at break of day.
Nations are in uproar, kingdoms fall;
he lifts his voice, the earth melts.
The LORD Almighty is with us;
the God of Jacob is our fortress.
Come and see what the LORD has done,
the desolations he has brought on the earth.
He makes wars cease
to the ends of the earth.
He breaks the bow and shatters the spear;
he burns the shields with fire.
He says, “Be still, and know that I am God;
I will be exalted among the nations,
I will be exalted in the earth.”
The LORD Almighty is with us;
the God of Jacob is our fortress.
To order memorial trees or send flowers to the family in memory of George T. Sterler, please visit our flower store.